Skip to content
The #StupidCold Arctic Outbreak of 2021 continues to set records locally, while Mid-Southerners wearily look ahead to one more winter storm that hopefully brings closure to the 2020-2021 winter season. Let’s dive in.

Over the past few days, Memphis has broken the following temperature and precipitation records:

What also seems to be likely top be tied at this point is a 1940’s-era temperature record for the longest streak of days at or below freezing. That record is nine days. Given forecast highs of 29 Wednesday and Thursday and 30 Friday, the current cold outbreak will likely be tie that record.

Of greater interest right now though is the third winter storm in the past week, which begins early Wednesday. Once again, we have another low pressure system tracking along the periphery of Arctic high pressure, along the Gulf coast, over the next couple days and coincident upper level energy in the form of a trough moving through the Mid-South. And once again, moisture will be abundant and lift generated by the trough will be sufficient to generate precipitation in a cold airmass. 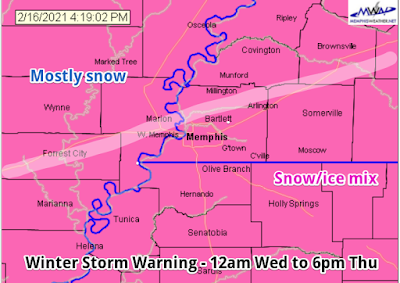 Temperatures in this system however will have moderated some from the President’s Day storm when we were in the low teens. Most precipitation will fall with surface temperatures in the 20s, even upper 20s, though temperatures aloft will be similar.

Precipitation begins with scattered snow showers, perhaps in the pre-dawn hours Wednesday morning, continuing off and on through the day. By mid-afternoon, the main upper level energy associated with this system approaches and precipitation will become steadier. Snow will likely come down fairly steadily in the early evening, though temperatures aloft will be warming closer to freezing.

Areas southeast of Memphis are most likely to see these temperatures aloft climb just above freezing, which will result in a mix of freezing rain or sleet with the snow. In fact, much of north MS is likely to see a mix of snow and sleet or freezing rain during the evening. In the immediate metro, those temperatures aloft are likely to remain very close to, if not below, freezing throughout the entire event – resulting in mainly snow. Some areas along and south of I-40 in the metro could see freezing rain mix in with the snow Wednesday evening, but areas north are likely to remain all snow.

As the upper level disturbance moves east around midnight, upper levels will cool off again and precipitation will become all snow once again for the entire area. It will also likely taper off or maybe end for a bit late Wednesday night. However, the main trough will move through Thursday, bringing additional light , perhaps even steady, snowfall during the morning and early afternoon hours.

How much, of what, and when?

The first round of snow on Wednesday will probably drop one inch or maybe two of fresh powder by sunset Wednesday. The “mixed precipitation” phase Wednesday evening could result in up to 2″ inches of snow for those that only see snow. For areas that receive a mix of precipitation, up to an inch of snow and perhaps 0.10″ of freezing rain with maybe a few ice pellets are expected. Finally, from midnight on, another 1-2″ of snow seems likely. That results in a storm total 4-6″ of snow for areas along and north of I-40 and an inch or two less snow and a glaze of freezing rain for areas closer to the state line into north MS by the time it ends Thursday afternoon.

If this system overperforms and the temperature profile remains below freezing for the entire event, 6-8″ of snow is possible. If it moves through quicker and does not tap into as much moisture, the low end seems to be 2-3″ of snow. Finally, if air aloft warms more than anticipated further north into the metro, we could be looking at up to a quarter of an inch of ice and the lower end snow totals (a couple inches). Model consensus still lacks a bit, but the confidence level for the forecast in the previous section is fairly decent.

Once the system departs, fresh snow and high pressure building back in with clearing skies Thursday night will mean one more frigid night. Look for one last polar plunge as lows again drop to around 10 degrees with wind chills near zero Friday morning.

However, with sunshine and that high moving in, temperatures will rebound into the upper 20s and melting will commence. The weekend looks decent with moderating temperatures (upper 30s Saturday and mid 40s Sunday) with a cold morning Saturday (mid teens) but back up to near freezing Sunday morning for the low. We’ll be watching a chance of REGULAR LIQUID RAIN Sunday into early Monday. Cross your fingers we don’t dip to freezing Sunday night!

Next week, we return to near to above normal temperatures (which by the way is upper 50s during the day) and maybe – just maybe – winter will be over as we head towards the first of March! Take that, groundhog!

Sunny Today With A Nice Warm-Up