Nothing new to add here.

But nothing new from the NHC.

Today was a good day for me to ignore the tropics.

Moving into Fall Color in Raleigh with blue skies.

And all the colors of fall on the trees….

…alongside the always green pines and magnoilas 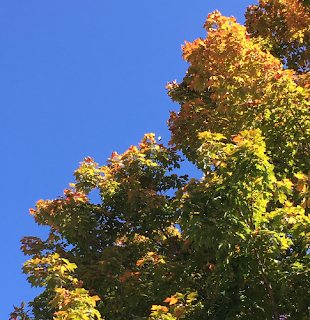 Sunday funday…. out in the sun day, enjoying Autumn weather and a little bit of Fall color beginning to take over in Raleigh. Here in the Piedmont we are at peak around Thanksgiving, but this year the oaks are turning yellow sooner and some of the sugar maples have popped and others have not. As for the tropics, not much popping today. I waited to see if the NHC would upgrade their one hit wonder in the Atlantic that they have been showing nonstop movie Trailers for the highly touted Subtropical Wanderer Storm …wandering around the Atlantic waiting for the right cold front to sweep it out to sea. Sometimes these can get spooky like Grace (Perfect Storm) or Joaquin but generally they are boringly out at sea though occasionally they threaten Bermuda the very popular tropical vacation spot in 2020 for Atlantic storms. If this was a mobster movie … someone would say they weren’t paying protection money and Mother Nature keeps harassing them with more storms in the area until they pay up!

Maybe at 11 PM the NHC will do something, but at this point I imagine they will wait to see how it looks in the morning and either upgrade or begin backing down by 10% the way they have done with the Caribbean system. The Caribbean system keeps showing on the models, but the date moves back a day or two on certain runs so we are just enjoying the beauty of the moment these days waiting to see what pops up next.

So that’s all I have to say today tropically speaking, other than wait for it, something will form down the road.

Today is a good day to do some Hurricane History here as we have reached that middle point in October when we come close to Halloween Hurricanes and November Naughty Storms that Zig Zag their way through the Caribbean doing the oddest tracks of all. Kate was a November storm rushing towards a cold front and left a trail of damage from tornadoes, so don’t count out November storms as weak things not to worry on … especially in 2020. 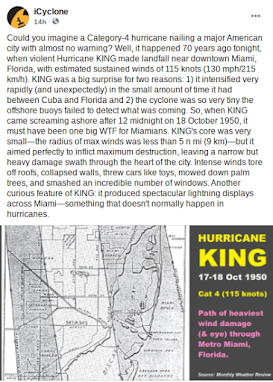 Talking on this hurricane today because….

The track before South Florida is below. 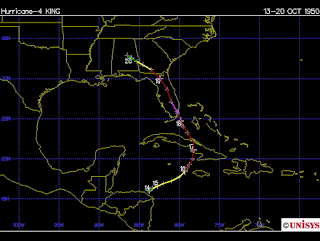 Oh look it formed down where we’ve been watching.

Seriously I showed this often with Irma.

Those models showing Irma going UP all of Florida.

Hurricane King did exactly that in 1950.

The city just floats there at the water’s edge.

And 1926 where the hurricane was huge vs small.

There’s no Irma or Epsilon today.

But 70 years ago King was doing Miami!

Back then there wasn’t much south of the Miami River.

In 1950 a Category 4 Hurricane plowed into Miami from the SSE and was so small in size but powerful in impact that it looked more like a tornado had traispsed through just one part of the city leaving the rest with very little impacts. In 2020 a hurricane such as that plowing into the Upscale, trendy and very expensive Brickell Section of Miami with sexy skyscrapers and multimilion dollar condos with their wrap around views of Biscayne Bay would have a price tag I don’t even want to think about. In 1950 that area was mostly suburban, lushly forested with hardwood hammocks, mangroves and sailboats. Miami in 1950 was a different world. I have interviewed many survivors of that storm and they insist they really think the damage was from tornadoes, but it was said to have been from an instense, small but mighty hurricane. For Miami people today it would be like Miami Beach had a Cat 4 Hurricane downtown but out in Kendall the sky was blue and it looked like the storm must have swerved away and missed Miami.

Hurricane Cleo in 1964 took a similar track up across Cuba and slammed into downtown Miami, we had some damage out in the Southwest section where I lived but nothing like areas on Miami Beach or Biscayne Blvd; note massive avoacado trees crashed onto our neighbors house but my mother in SW Miami didn’t get the same storm her sister who lived near downtown got …the way they talked on both the storms was very different.  For that matter people in downtown Miami had a very different hurricane than they did from people down in Homestead in 1992 when Andrew plowed across the Southern part of the county leaving damge usually seen by strong tornadoes and in North Dade someone’s pine tree lost it’s top!

So the point here is………. size matters, strength matters and it matters where you live when the storm is moving towards you. Are you on the fringe of the storm or are you socked by the solid, strong core of a Category 4 Hurricane.

So kudos to Mister @iCyclone for who loves history and knows his hurricanes very well even if he is a California Dude living in the Deep South for a little while longer while he shelters in place in one of the most beautiful towns on the Gulf of Mexico with an awesome hurricane history waiting to see where he might deploy next as we wait to see if the 2020 Hurricane Season ends with a bang or a whimper. 2020 the longest run on hurricane season we have had in a long time.

I’ll update Monday morning, unless the NHC suddenly does an upgrade for our Mid Atlantic Invest.

Hope your day was good, mine was as we went to the Farmers Market and I love the Farmers Market because there’s music and fruit and vegetables and snacks and everyone is in a wonderful mood. It’s better than Disney, really! Of course it’s THE STATE FARMERS MARKET not a small one and flags are flying and music is playing and I got some pumpkin ice cream and now I’m watching football sipping a Dr. Enuf with cherry and ginseng AND Guarana (it’s a local herbal soda round these parts) and making Chili for dinner. So that’s my world today, hope your world rocks in only good, good ways.