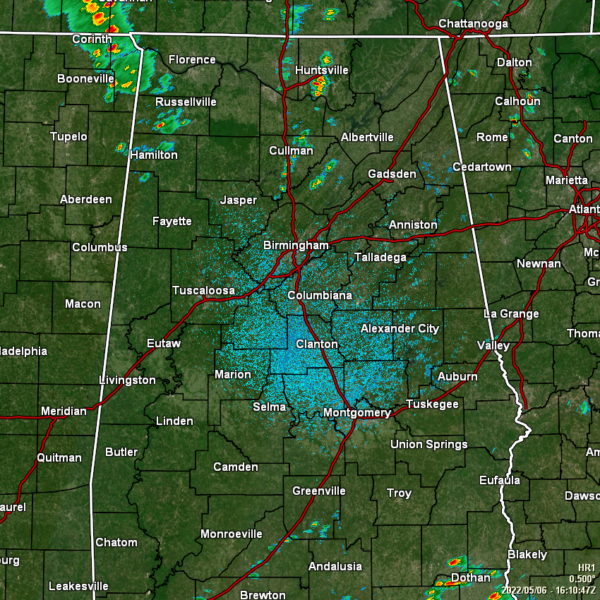 Storms along the Gulf Coast this morning has cut off much of the instability from moving northward into North/Central Alabama, which has kept the weather for the most part mainly quiet. Only a few showers have developed in North Alabama, mostly in portions of Cullman and Marshall counties, and up in the northwestern corner of the state. The only activity in Central Alabama is a few showers in north-central Blount County.

NWS Birmingham really has trimmed back the severe risks to mainly east of a line from Selma to Clanton to just west of Gadsden, with the greater risk east of a line from Montgomery to Alexander City to Anniston. That severe threat window is only expected to last until around 2 pm before the front moves out of the area. Plus, this threat is highly conditional. West of I-65, other than a few scattered showers, the severe threat is over for this system.

Temperatures as of the 11 am roundup were in the 70s for the most part across the area. Haleyville was the only reporting station in the upper 60s at 69º. Montgomery was the warm spot at 79º. Birmingham was sitting at 76º.

No matter where you are located in Central Alabama, it will remain breezy at times out there as pressure gradient winds could gust as high as 30 mph.