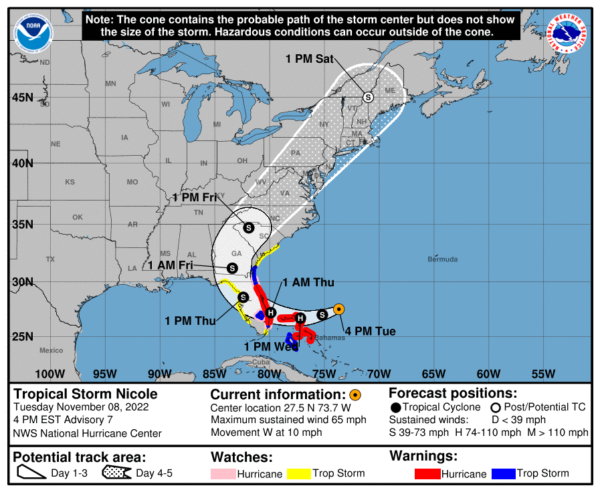 DISCUSSION AND OUTLOOK
———————-
At 400 PM EST (2100 UTC), the center of Tropical Storm Nicole was located near latitude 27.5 North, longitude 73.7 West. Nicole is moving toward the west near 10 mph (17 km/h). A west-southwest motion is expected through early Wednesday. A westward to west-northwest motion is forecast to begin later on Wednesday, followed by a turn toward the northwest and north-northwest on Thursday and Thursday night. On the forecast track, the center of Nicole will approach the northwestern Bahamas tonight, move near or over those islands on Wednesday, and approach the east coast of Florida within the hurricane warning area Wednesday night or early Thursday. Nicole’s center is then expected to move across central and northern Florida into southern Georgia Thursday and Thursday night.

Maximum sustained winds have increased to near 65 mph (100 km/h) with higher gusts. Additional strengthening is expected during the next day or so, and Nicole is forecast to become a hurricane on Wednesday when it is near the northwestern Bahamas, and remain a hurricane when it approaches the east coast of Florida.

Nicole is a large tropical cyclone. Tropical-storm-force winds extend outward up to 380 miles (610 km) from the center. The estimated minimum central pressure is 990 mb (29.24 inches). 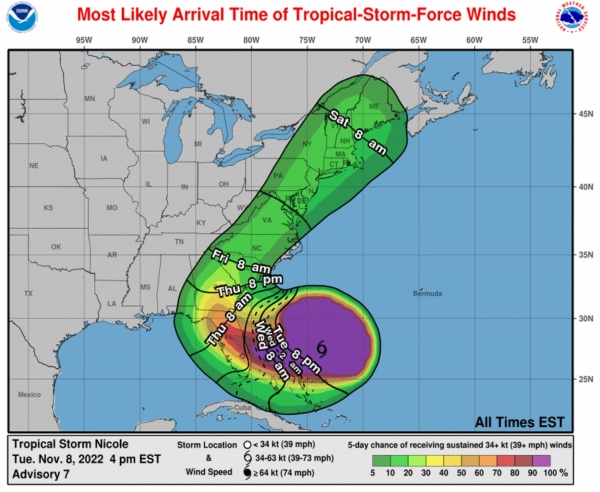 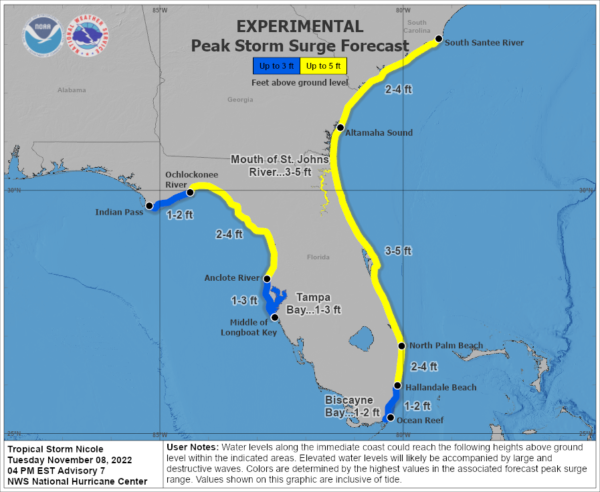 Storm surge could raise water levels by as much as 4 to 6 feet above normal tide levels along the immediate coast of the northwestern Bahamas in areas of onshore winds.

The deepest water will occur along the immediate coast near and to the north of the landfall location, where the surge will be accompanied by large and destructive waves. Surge-related flooding depends on the relative timing of the surge and the tidal cycle, and can vary greatly over short distances. 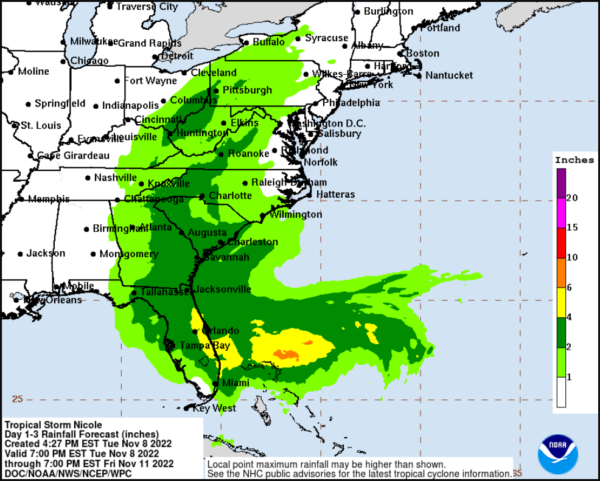 RAINFALL: Nicole is expected to produce the following rainfall amounts through Friday:

Northwest Bahamas into the eastern, central and northern portions of the Florida Peninsula: 3 to 5 inches with local maxima of 8 inches.

Southeast into the southern and central Appalachians, western Mid-Atlantic, and eastern portions of Tennessee, Kentucky, and Ohio: 2 to 4 inches with local maxima of 6 inches along the Blue Ridge.

Flash and urban flooding will be likely, along with possible renewed river rises on the St. Johns River, across the Florida Peninsula on Wednesday and Thursday. Heavy rainfall from this system will spread north farther up the Eastern Seaboard late Thursday into Friday.

TORNADOES: Isolated tornadoes will be possible from eastern Florida into parts of eastern Georgia and eastern South Carolina beginning late Wednesday night and continuing through Friday.

SURF: Large swells generated by Nicole will affect the northwestern Bahamas, the east coast of Florida, and much of the southeastern United States coast during the next several days. These swells are likely to cause life-threatening surf and rip current conditions. Please consult products from your local weather office.