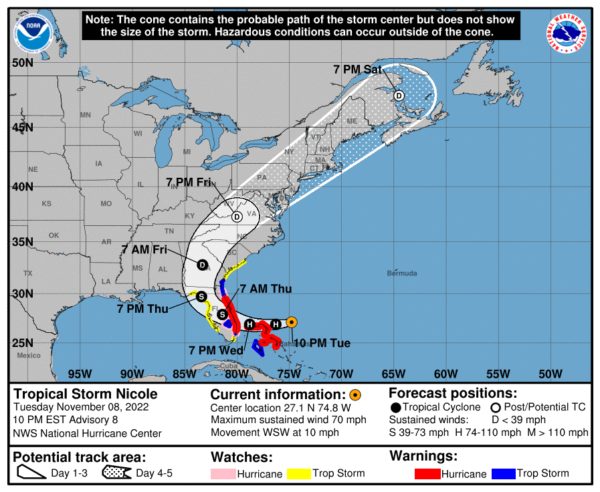 DISCUSSION AND OUTLOOK
———————-
Nicole’s satellite appearance has changed little since this afternoon. Deep convection is not very strong near the center of the cyclone at this time, and there appears to be some dry air intrusions into the circulation as evidenced by water vapor imagery. Nonetheless, wind and central pressure observations from NOAA and Air Force Hurricane aircraft indicate that the system is very close to hurricane strength and the current advisory intensity is set to 60 kt.

Center fixes indicate that the cyclone is moving west-southwestward, or about 250/9 kt. The track forecast philosophy is basically the same as in the previous advisory package. Nicole should move west-southwestward to westward, on the south side of an eastward-moving high pressure area, for the next 24 hours. Thereafter, the system should turn northwestward and then northward along the western side of the high. In 3-5 days, Nicole is likely to accelerate northeastward over the eastern United States, to the east of a large mid-level trough. The track model guidance has not changed significantly, nor has the official forecast. This is near the southern edge of the guidance suite for the next 1-2 days, and roughly in the middle of the guidance thereafter.

Nicole will be moving over fairly warm SSTs of 27-28 degrees Celsius during the next day or so. However, the SHIPS guidance indicates that the vertical shear will be 25 kt or higher, with low-to mid-tropospheric humidities on the order of 50 percent, during the next 24 hours. Nicole is likely to become a hurricane soon but, given the marginal dynamic and thermodynamic environment, significant strengthening seems unlikely. The official intensity forecast is near or above the available model guidance, and closely follows the decay-SHIPS model after landfall. Weakening is expected after Nicole moves inland over Florida and Georgia and while it accelerates northeastward over the southeastern United States. The cyclone should complete extratropical transition by 72 hours and merge with another extratropical low near Atlantic Canada in 120 hours.

KEY MESSAGES
————-
1. Hurricane conditions and a dangerous storm surge are expected in portions of the northwestern Bahamas on Wednesday, where a Hurricane Warning is in effect. 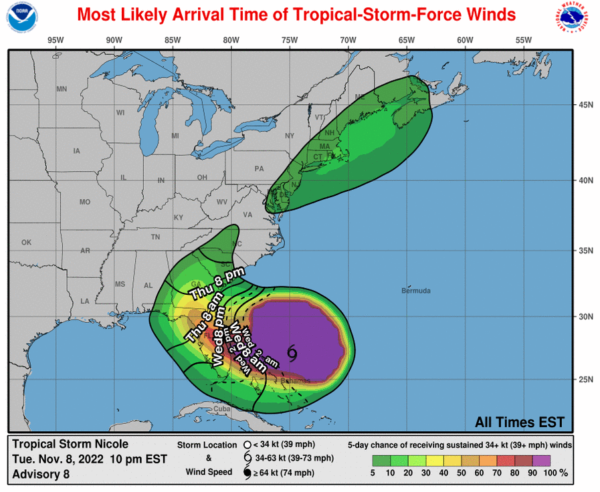 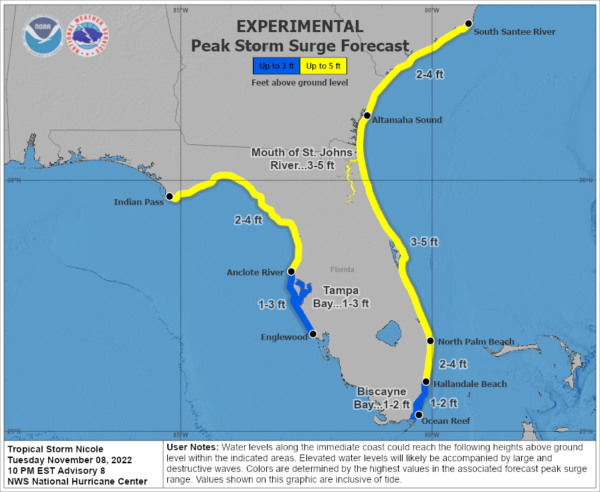 3. A dangerous storm surge is expected along much of the east coast of Florida and portions of coastal Georgia where a Storm Surge Warning is in effect. The storm surge will be accompanied by large and damaging waves. Residents in the warning area should listen to advice given by local officials.

4. Do not focus on the exact track of Nicole since it is expected to be a large storm with hazards extending well to the north of the center, outside of the forecast cone. These hazards are likely to affect much of the Florida peninsula and portions of the southeast United States. 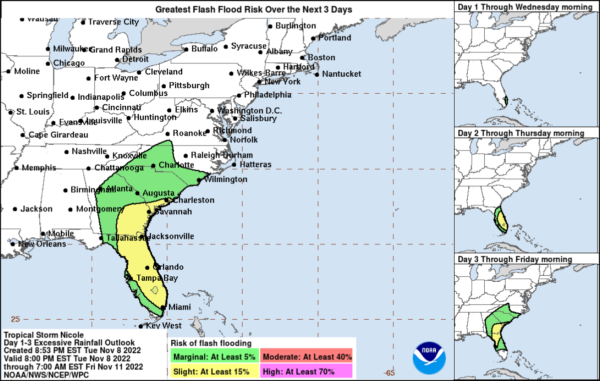 5. Nicole will produce heavy rainfall Wednesday and Thursday across the Florida Peninsula. Flash and urban flooding will be likely across portions of the Florida Peninsula along with possible renewed river rises on the St. Johns River. On Friday and Saturday, flash, urban and small stream flooding will be possible in the Southeast through the Mid-Atlantic and central Appalachians.