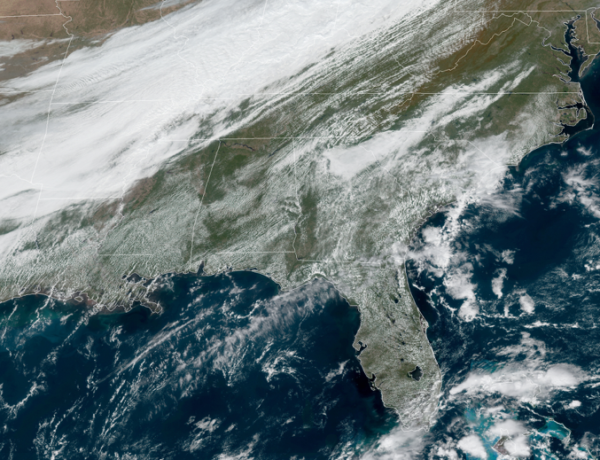 We are seeing some fair-weather cumulus clouds forming across a decent portion of Central Alabama, but a mass of clouds are approaching the area from the west associated with a cold front that will bring a change to our weather for Friday and the weekend. Temperatures as of the 12 pm roundup were ranging from the lower 70s to the mid-80s. Eufaula was the warm spot at 84 degrees while Gadsden was the cool spot at 72 degrees. Birmingham was at 76 degrees.

We’ll start to have some fair-weather clouds build throughout the afternoon hours before an approaching cold front brings even more clouds with it for tonight and through the overnight hours. There is just enough moisture associated with this front that a few raindrops may be possible for locations north of the I-59 corridor tonight, while the rest of the area stays dry. Afternoon highs will rise into the upper 70s to the lower 80s across the area with tonight’s lows falling into the upper 40s to the upper 50s.

MUCH COOLER ON FRIDAY

For much of Central Alabama, high temperatures on Friday will be much cooler than what you will see for today. We’ll start off with some clouds but those will be decreasing throughout the day. Afternoon highs will only range from the lower 60s in the northwest to the upper 70s in the southeast. Birmingham should top out around 65 degrees. For the high school football games, skies will be mainly clear throughout the evening so those temperatures will start to cool off quickly. Temperatures at kickoff will be around the mid-50s to the upper 60s across the area and falling into the upper 40s to the lower 60s by the final whistle. 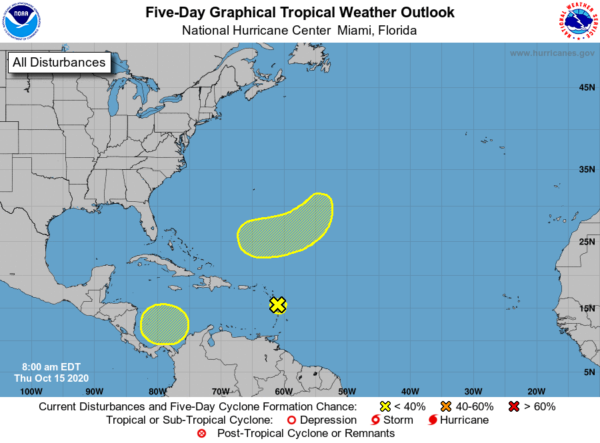 THE TROPICS GETTING ACTIVE AGAIN

A weak area of low pressure near the Lesser Antilles has become less well defined since yesterday. Strong upper-level winds are expected to continue to inhibit development while the system moves west-northwestward over the next couple of days. Although development is no longer anticipated, the system could produce locally heavy rainfall across portions of the Lesser Antilles, the Virgin Islands, and Puerto Rico over the next few days.
* Formation chance through 48 hours…low…near 0 percent.
* Formation chance through 5 days…low…near 0 percent.

A broad non-tropical low-pressure system is expected to form over the weekend several hundred miles east-southeast of Bermuda. Some slow development will be possible thereafter into early next week while the system moves southwestward and then westward, passing about midway between Bermuda and the northern Lesser Antilles.
* Formation chance through 48 hours…low…near 0 percent.
* Formation chance through 5 days…low…20 percent.