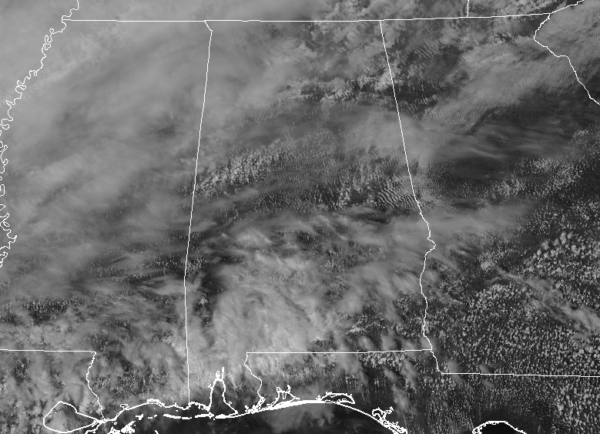 AT 1:50 PM: We continue to have a good bit of clouds covering much of Central Alabama going into the mid-afternoon hours, while some sunshine is making it to the surface. There may be a few brief sprinkles under those clouds in portions of Winston and Lamar counties, but the rest of the radar is free from any activity. Temperatures at 1:00 pm were in the upper 60s to the lower 80s across the area. Selma was the warm spot at 81 degrees. Sylacauga was the cool spot at 69 degrees, tied with Auburn and Haleyville. Birmingham was at 75 degrees.

A few isolated showers remain possible north of I-20 through the rest of the daylight hours while the rest of the area will remain dry with partly to mostly cloudy skies. Highs will top out in the mid-70s to the lower 80s. While a stray shower or two may remain possible north and west of I-59 during the late night and overnight hours, we will be dry across the area with some clouds and the potential for some patchy dense fog before sunrise. Lows will be in the lower to mid-60s.

A new cold front will begin its trip toward Central Alabama on Sunday. At this point, much of the morning and into the early parts of the afternoon may be dry, but rain and storms look to move into the northwestern parts of the area during the latter part of the afternoon and eventually moving throughout the rest of Central Alabama. No severe weather is expected and highs will be in the mid-70s to the lower 80s across the area.

THIS WEEK IS SEVERE WEATHER AWARENESS WEEK FOR 2021
Alabama is no stranger to severe weather, including tornadoes. They can happen any month of the year and any time, day or night. However, our primary severe weather season is considered to be from November to May. Last year, 73 tornadoes touched down across Alabama. Unfortunately, four lives were lost, and over a dozen were injured. Advanced planning and increased awareness will help residents of Alabama survive these deadly storms. Throughout this week, we featured special posts and infographics on the blog about severe weather awareness and safety.

For the rest of this weekend, the state of Alabama will hold a sales tax holiday for severe weather preparedness items. Don’t miss this great opportunity to purchase any items you may be missing from your emergency kit. For more information, including tax-exempt items and participating counties and municipalities, please visit https://revenue.alabama.gov/sales-use/sales-tax-holidays.

ON THIS DAY IN WEATHER HISTORY
2010… A weak EF0 tornado causes no damage as it moved across California’s southern San Joaquin Valley. However, it is the only tornado reported in the United States during the month. According to the Storm Prediction Center only five months since 1950 have lacked a tornado report.