BIG WARM-UP: We are starting off the day around the freezing mark across much of North/Central Alabama, but we expect a big warm-up today with sunshine in full supply… the high will be in the 65-70 degree range this afternoon. Tomorrow will be another sunny day with a high around 70 degrees.

THURSDAY/FRIDAY: A surface front will drift down to near the Tennessee border, and moisture levels will rise Thursday. A few isolated showers are possible during the day, but rain is more likely Thursday night into Friday as a wave aloft moves through the region. There could be a rumble of thunder in spots, but no severe storms are expected, and the best chance of rain will be over the northern half of the state. The high Thursday will be in the 60s, but dropping into the 50s over the northern third of the state Friday as the front sags southward.

THE ALABAMA WEEKEND: The front will drift northward, and will be somewhere around the Tennessee Valley over the weekend. Showers are possible over the northern half of the state Saturday and Sunday, but the weekend won’t be a “wash out” by any means. The heaviest rain, most likely, will be north of the Tennessee River, especially over the state of Tennessee. For North/Central Alabama, the weekend will feature more clouds than sun with a few showers around from time to time. South Alabama will be generally dry. And, the weather will stay mild with highs in the 70-75 degree range… it looks like the warmest weekend so far this year.

NEXT WEEK: The weather won’t change too much through the week as the stalled boundary will meander around the Deep South… mostly cloudy days, a few showers occasionally, and highs mostly in the 60s. Still no sign of any really high impact weather event for Alabama for the next seven to ten days… See the Weather Xtreme video for maps, graphics, and more details.

ON THIS DATE IN 1975: The F4 tornado that struck Tuscaloosa on February 23, 1975 just before 2 p.m. CST was not only the strongest tornado that struck the State of Alabama that year, it was the deadliest. The tornado first touched down in the Taylorville community and then skipped northeastward before hitting the Skyland Park area and moving on to the McFarland Blvd. exit area of I-59/20. It went on to affect parts of the Alberta City-Leland Park area and then touched down in Holt. 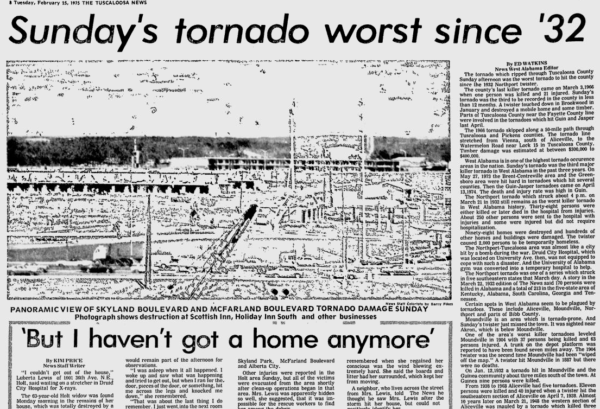 The official path length was 14.4 miles. Along it, 289 homes were destroyed or heavily damaged, along with 20 businesses and 21 mobile homes. The tornado nearly destroyed the new Scottish Inn motel on I-59 at McFarland. The fatality was a 23 year old housekeeper named Thelma Hill, killed when most of the second floor of the motel was sheared away by the tornado causing a wall to fall on her.