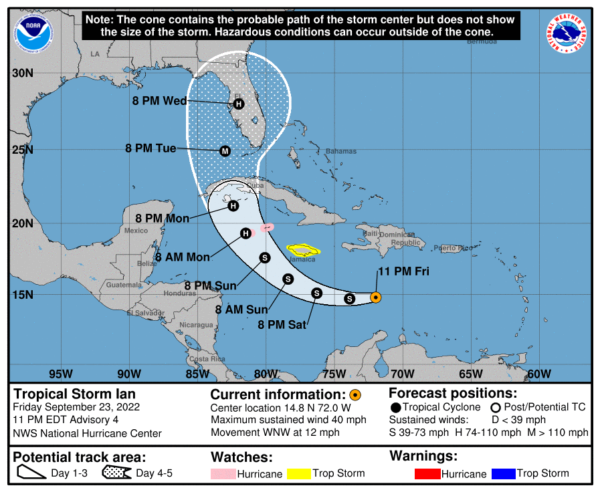 As of 10 pm CDT Friday, Ian was located round 385 miles to the south of Kingston, Jamaica, and was moving to the west-northwest at 12 mph. Maximum sustained winds were at 40 mph at this point, but Ian is expected to become a category 3 hurricane before making a forecast landfall on the Gulf Coast of the Florida peninsula by Wednesday night. A hurricane watch is up for the Cayman Islands and a tropical storm watch is up for Jamaica.

Ian is expected to produce heavy rainfall and instances of flash flooding and possible mudslides in areas of higher terrain, particularly over Jamaica and Cuba. Hurricane conditions are possible in the Cayman Islands by early Monday, with tropical storm conditions possible by late Sunday. Tropical storm conditions are possible in Jamaica on Sunday. Early next week, Ian is forecast to move near or over western Cuba as a strengthening hurricane and then approach the Florida peninsula at or near major hurricane strength, with the potential for significant impacts from storm surge, hurricane-force winds, and heavy rainfall.

CENTRAL ALABAMA WEATHER FOR THE WEEKEND

Today will be a very nice but very warm day across Central Alabama, with tons of sunshine and very little in the number of clouds. After a nice morning with lows in the lower 50s to the lower 60s, afternoon highs will top out in the mid to upper 80s.

On Sunday, a front will move through the area that will bring just enough moisture to destabilize the atmosphere for a few isolated to scattered showers to form during the mid-morning through the afternoon hours. Highs will stay warm, as we’ll see mid 80s to the lower 90s.

Drier air and cooler temperatures will start to filter into the area on Monday, but we’ll have to wait one more day for it to feel like “true fall.” Highs will be throughout the 80s. Tuesday is going to be what you expect to see for fall in Central Alabama. Sunny skies with a little breeze at times. Highs in the mid 70s to the mid 80s.

THE REST OF THE TROPICS 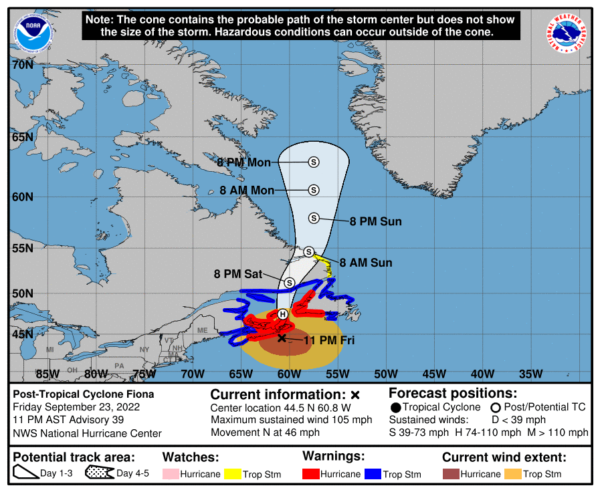 Post-Tropical Cyclone Fiona continues to race northward at 46 mph and will be moving across the extreme eastern portions of Canada. Winds have dropped to 105 mph and will continue to weaken over the next 3-4 days until dissipation. Hurricane and Tropical Storm Warnings are in effect for much of Atlantic Canada. Large swells generated by Fiona are expected to cause life-threatening surf and rip current conditions along much of the east coast of the United States, the northwestern Bahamas, Bermuda, and Atlantic Canada during the next couple of days. 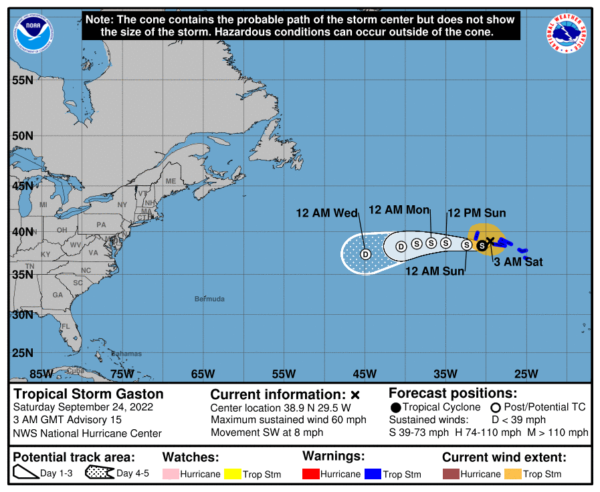 Tropical Storm Gaston has winds at 60 mph and is moving to the southwest as of the 10 pm CDT Friday update. Tropical storm conditions are expected over portions of the western and central Azores today. Gaston is expected to produce heavy rainfall over the western and central Azores today. This rainfall may result in landslides and areas of flooding. Gaston is expected to become post-tropical before this video is released to the wild. 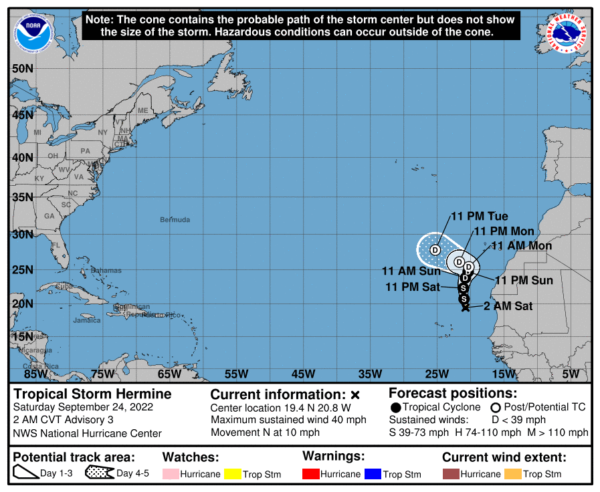 The 10 pm CDT Friday advisory on Tropical Storm Hermine shows that it continues to move slowly northward and potentially weakening back to a depression by late tonight or early Sunday morning. Rainfall totals of 2-6 inches over the Canary Islands through this weekend is possible due to a combination of a mid-latitude trough and moisture from the cyclone. This rainfall could cause some flash flooding in areas of higher terrain. 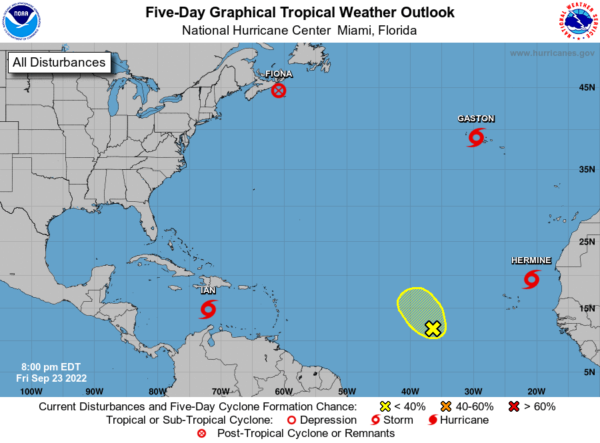 And, finally, showers and thunderstorms remain disorganized in association with a broad area of low pressure located several hundred miles west-southwest of the Cabo Verde Islands. Despite unfavorable upper-level winds, some slow development of this system is possible over the next several days while it drifts northwestward or northward over the central tropical Atlantic. The NHC gives it a low chance of becoming a depression within the next five days.

The central pressure of Hurricane Gloria bottomed out at 918.6 millibars (27.13 inches) in the western Atlantic near 24.5 N/ 70.5 W. No previous hurricane on record in this part of the Atlantic had ever been this intense. Winds at the time as recorded by a reconnaissance aircraft were measured sustained at 156 mph. The media immediately declared Gloria the “killer storm of the century” and basically had the entire East Coast of the U.S. preparing for atmospheric Armageddon.