This is that usual old fashioned sort of season.

Been a long day. I worked for a Rabbi in Miami years back managing his office. Way back, young mother and I’d say between babies but when I gave birth he set up a “nursery” in the office so I could bring my daughter. I did that until she figured out how to hurl herself over the playpen and dump his stationary and business cards all over the floor and decided I was done being a “working mother” lol so left. As a favor I worked again years later for him when he was between office managers. He passed away today at the age of 93 not long after his wife of a lifetime passed away this past year. I’m close friends with his kids and his grandkids have been best friends with my kids, including his granddaughter who was best friends with my little daughter who helped run his office.

So I worked there when Hurricane Andrew decided to come to town and threatened to tear everything in it’s way down. You know, way back before it took that “dip” to the South saving Miami Beach and Downtown Miami from Category 5 winds! The Synagoue is at one of the narrower parts of Miami Beach, not far from where the Beatles performed at the Deauville on the Ed Sullivan Show. And, it’s on a waterway kind of where I imagined the storm surge could pile in on the back side of the Miami Beach. And, Rabbi Weberman was in Israel on a working vacation when Hurricane Warnings were put up for Hurricane Andrew! He said “not to worry” and “lock up the office and go home take care of your family” but if you know me you know…that wasn’t happening.  So I moved some things away from the windows, covered some things with plastic. I wanted to do the best I could if the window that faced the bay inlet was smashed or cracked. 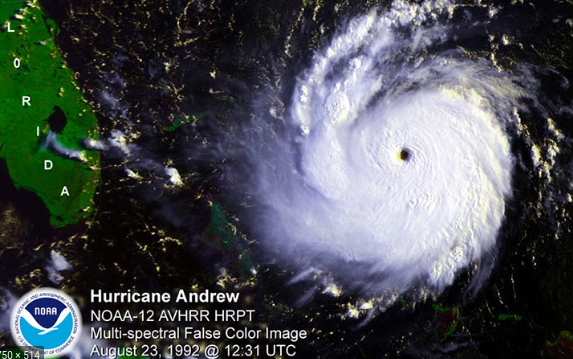 Seeing a Category 5 Coming straight at your home…

…place of work and beach a few blocks away is wild. 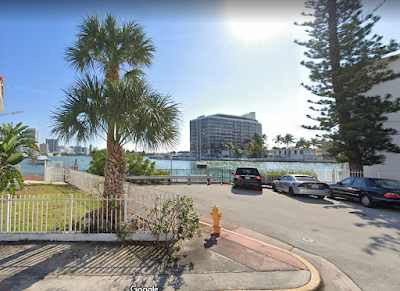 So we locked up (literally) and I stood there staring….

…at the beautiful waterfront view.

Not that many feet away.

Visions of destruction danced in my head.

Wondered what it would look like after the storm.

I remember almost laughing thinking there’s a Category 5 hurricane headed straight for us and I’m reorganizing the office and covering things with plastic garbage bags…. when the whole building could blow away. But, Hurricane Andrew “dipped South” and it did not hit us head on, though there was wild damage nearby on many streets. A day or two after Andrew when we could drive North from our house near 41st Street we went up to check to see if everything was okay. Structures were fine, huge trees were down and in odd spots the street was closed off because huge AC units on Condo Rooftops had crashed to the ground during the height of the storm. The office was okay, a little bit of water had gotten into the unbroken windows through a seam nearby and we clearned it up. Moved things back. The damage we had seen driving North up the beach was mind boggling, but mostly trees down along with AC roof top units. There was beach sand on Collins Avenue still in places from the wind and the storm surge. Really, I was there during Andrew I know. Something you can’t imagine unless you have been through a hurricane. My home, further South was in an area that had some odd structural damages. A roof had blown off in the storm and landed on a neighbor’s pool; the owners of the home were out of town when it happened. 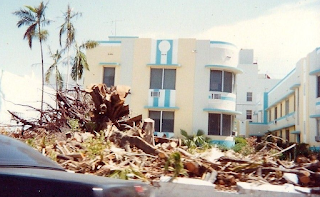 That was a few blocks away.

As we drove towards the Temple.

Tree trimmers working at the downed…

….huge Ficus Tree that crashed down.

So while I loved the job and enjoyed chatting with the Rabbi who was really funny and I learned a lot from. I had a little office to myself, a brand new fast computer at a time many people did not have a computer and a part-time job that worked into my life. I was so organized that I used the calendar program on the computer to make menus for the week. August of 1992 started out as one of the most organized months of my life. I even knew what I was making on August 24t!!  But I didn’t make it as we had no power for ages and we had a make shift picnic from hurricane supplies instead!

That’s the point. Some people die at 29 and others live wonderful, richly filled lives with children, friends, cousins, grandkids and others die at 92 or 93 (the jury is still out on his age) and that’s the way life goes.  He was the Police Champlain for the City of Miami Beach…for all the police officers. They were at the funeral home with their cars and motorcycles to give him a police escort to the airport to be flown to Israel for burial by his wife who passed away last year.

If someone says to me “when did you work for Rabbi Weberman” it’s easy to say when Rivky was born, but my first thought is “Hurricane Andrew” as this is how you mark memories and time when you grow up in Hurricane Country and hurricanes often happen.

Sometimes you get lucky and it dips South and other times you don’t get lucky because the dip South takes it straight to your house!

I have a strong feeling that the Miami area will see a landfalling hurricane this year.

Hopefully it’ll miss a direct hit but I wouldn’t put money on it.

Enjoy life! My best friend Sharon is very ill with cancer currently and she walked every step of the Hurricane Andrew dance with me after deciding in the hot, horrible summer of 1992 that we “WERE GETTING A HURRICANE” and she was right; she’d have bet money on it. Infact someone came by a month before Andrew and offered to prune the huge tree by her picture window facing NE and she gave them money and it was a good thing as that window most likely would have broken being pounded by that tree.

If there is no storm you can eat the hurricane supplies later or donate them to a food bank!