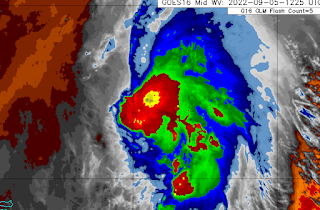 The above image tells the current story.

Shear keeps shooting at it…

Blowing the convection to the East.

The center “core” red with a yellow dot.

If we can call this the center and I will for now.

So currently it’s a sheared system.

BUT it refuses to give it up to the shear.

Earl has been from day one a stubborn one!

The bottom line, the only line, is that Earl has been stubbornly fighting off shear, ignoring the TUTT and evaporating the SAL (as it was huge and carried it’s own moisture pack with it) to get to where it is now and as the NHC forecast shows it is expected to become a strong hurricane in the Atlantic. 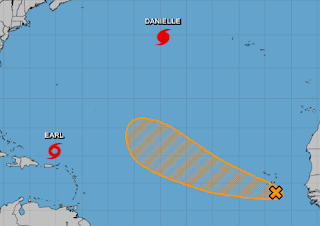 Something huge would have to happen …

…for that not to be a fish. 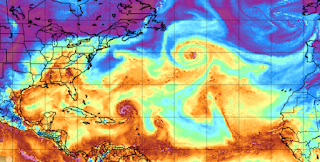 You don’t need a loop here to loop to see what the result is as it’s kind of stagnant and repetitive. At some point Danielle picks up and makes her move towards England and that part of Europe.  For now it’s an anchored “dot” in the North Atlantic. Earl hovers just N of PR wound up tight as if it’s a 70 mph but the NHC has kept it on a leash at 50 MPH as if Earl has found the secret of youth. Always 50… with a little baby or groupie hanging on it’s tail! See small “mini Earl” in it’s wake. A new wave is coming off Africa but it looks rather “meh” and a feature mid  Ocean far East of Earl doesn’t really go away but doesn’t develop, capturing moisture as if it’s playing some ancient game. 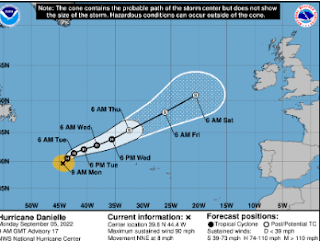 Eventually…. Danielle steps on the gas.

…. Earl follows in her wake. 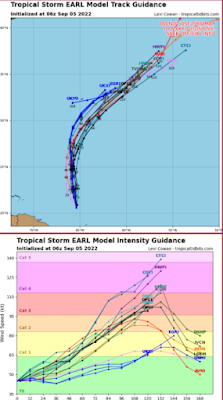 Not showing the cone as it follows the models.

Intensity is all over the place however.

All the food you want on one plate!

Pretty sure you are wondering what my “but” is and what bothers me. I mean if I am just going to parrot what the NHC says why do you need to read my blog or any blog or any YouTuber?

Generally intensity is connected to getting the timing of the track correctly.  An example being, if the timing is off then rather than hit a sweet spot where Earl intensifies into a mighty whale out in the Atlantic, a Major Hurricane taking up the Atlantic. If Earl dawdles too long he misses his opportunity and if the timing is off then often the intensity is off as well! Why are the models all in perfect harmony on track and yet they disagree on how strong it will be once it’s there? The spread goes from strong Tropical Storm to um is that a Cat 5 at the top? Being a bit silly as I know that and I suppose you can just average it all out and say it’ll be a Cat 3 or strong Cat 2. But not everything in life can be simply averaged out and this will all work it’s way out in the end when Earl does what it needs to do (and always has) and models will come into better agreement on intensity or they will begin to differ on the track down the road.  A few models have hinted at Earl going out to sea but not to Europe and in truth …only time will tell.

Today is Labor Day for me and that usually means a hurricane is threatening somewhere and sometimes my own home state, but today I’m sipping Texas Pecan Coffee and making lists of things to do today before I do other things tomorrow. Savor the day … ya know?  Fall is so close I can almost feel it, some of the trees have leaves just beginning to turn and yesterday I bought potted yellow mums at Trader Joes for $3.99!! Bright, pretty and a promise of cooler nights and days to come down the road. Okay I also bought Pumpkin Bars for $1.99 that way, way better than the ones they sold last year. Talk about cheap thrills……..

As for the rest of the season I do NOT believe the rest of the storms will be Fish Storms, tho currently it feels like the NHC opened a new food truck called “The Fish Grille” with only fish on the menu. There will be that one storm, that one storm that breaks from the pack and heads towards landfall somewhere. Many of us have worried on October or perhaps something around the Fall Equinox when hurricanes often happen.

Enjoy the weather outside or go to a movie.

Rainy at the beach (in many places) go to the Mall, catch a sale and stimulate the economy.

Staycation lures you into staying home? Redecorate the house for Fall!

Whatever you do today… do it with a smile!

Ps… I’ll update when there is something new to say!

Thought of leaving you with “Music for a Sushi restaurant”  but nah… won’t all be fish storms. So I’ll leave you with a stange video by Ed Sheeran who I love to listen to and showed up as a “End of Summer song’ on YouTube ??? I like the song, it reminds me of some song from the 80s that would be played nonstop on MTV so if you like the song but not the video close your eyes and make your own video to the song… your choice. But as for me not going to stare at Earl at 3 AM anymore… but maybe a feisty Fiona?? Definitely NOT a Fishy Fiona!