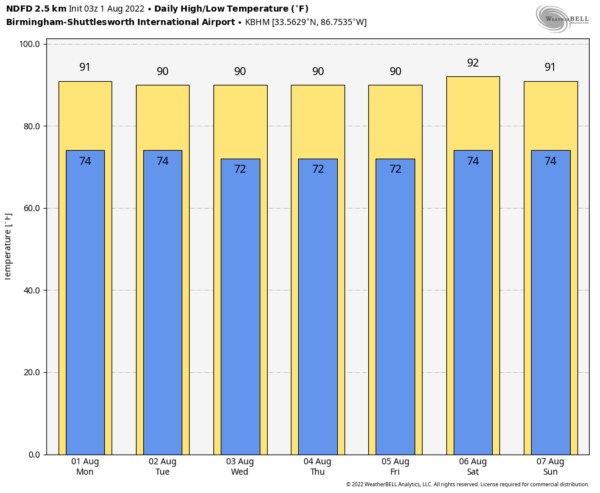 Temperatures for the Birmingham area for this forecast period.

THIS WEEK: Ridging over the southeast will keep any fronts out of the area, but we cannot rule out the daily chance of scattered, mainly afternoon to evening showers and storms. Today, we’ll see higher rain chances over the northern half of the area as a short wave will move through those parts. Only very isolated showers and storms can be expected in the south. Highs will be in the mid 80s in the north to the mid 90s in the south.

Higher rain chances shift more to the south on Tuesday, as isolated showers will be possible across the northern half of Central Alabama during the afternoon hours. Highs will be in the upper 80s to the lower 90s.

The GFS shows a more typical pattern over the area on Wednesday with the usual chance of isolated to scattered mainly afternoon showers and storms. However, cloud cover and showers over the southern and southwestern parts of the area will keep the highs lower in those locations. Highs will be in the mid 80s to the lower 90s.

A front will try to push into the southeast on Thursday, but high pressure over the area will keep it away. We’ll continue the typical summer pattern with the daily dose of isolated to scattered, mainly afternoon showers and storms. Highs in the upper 80s to the lower 90s.

High pressure looks to strengthen over the southeast on Friday, which will keep us mainly dry, with only a very small chance of a few isolated showers. Highs will be in the upper 80s to the lower 90s.

THE CENTRAL ALABAMA WEEKEND: An uptick in moisture levels will bring an increase in scattered afternoon and evening showers and storms for the weekend, while much of the morning hours will be dry. Highs will be in the upper 80s to the mid 90s on both days. 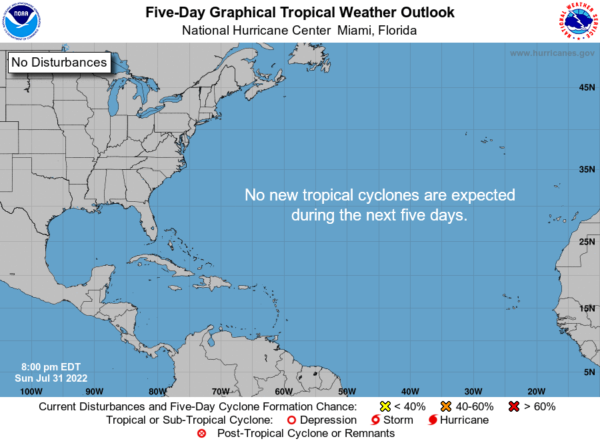 THE TROPICS: All remains calm across the Gulf of Mexico, the Caribbean Sea, and the tropical Atlantic Ocean, and no new tropical systems are expected to form over the next five days. While it has been rather quiet so far, we are getting closer to the peak of the season, which is August 20th to October 10th). 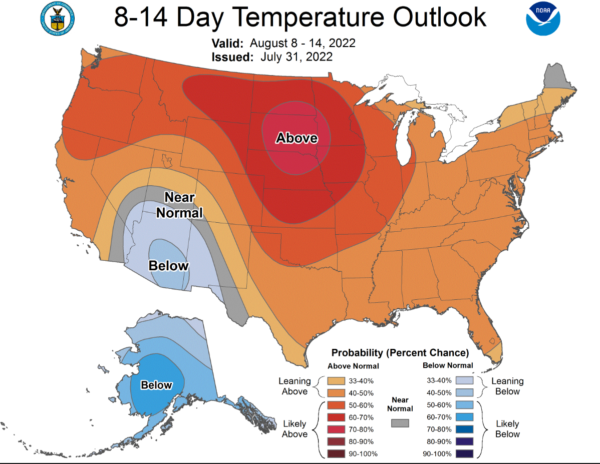 EXTENDED OUTLOOKS: Looking at the extended 8-14 Day Temperature Outlook from the CPC, and it shows what we would expect across Central Alabama for this time of the year, with temperatures running right at or just above normal. And our rainfall for the same time period will be right around normal.