As we sit right now, on April 24, and despite a few recent days in the mid 80s, April has averaged cooler than normal and also wetter than typical. The trend looks to continue into the last week of the month. And since, Memphis in Mud May officially kicks off in April this year (next weekend), we’ll take a look at what you need to be anticipating if you have plans to attend Beale Street Music Festival at the Fairgrounds at Liberty Park. 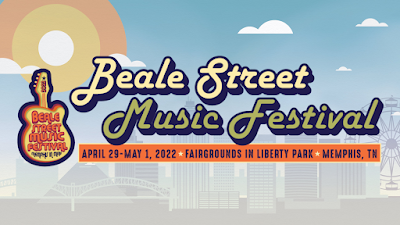 Those 80s I mentioned above have provided a teaser of early summer, but some 80s in spring is not unusual and don’t typically have staying power. That is the case this weekend as well, with a cooler airmass poised to move into the Mid-South behind a front Monday morning. Rain chances tick up tonight, especially towards morning. A few rumbles of thunder are possible with warm, moist air in place and a lift provided by the front sufficient to trigger some thunderstorms. Those are most likely late tonight into Monday morning. Fortunately, severe weather really isn’t a concern.

The cold front moves through around mid-morning, switching wind to the north. Precipitation ahead of the front is likely to be scattered, while we could see some steadier rain (though not particularly heavy) trailing behind it into the afternoon hours. Those precipitation chances drop off by mid-afternoon though leading to a fairly dry evening. We’ll only see temperatures bottom out in the mid 60s overnight, and though they may rise a few degrees in the morning, I expect they’ll start to fall some again by mid-afternoon. Overall – 60s most of the day is the most likely scenario.

By Tuesday morning, lingering clouds from Monday night should be clearing out quickly. Coupled with a northerly breeze, much drier air arrives leading to a very pleasant day. Morning lows will be in the lower 50s and highs in the mid 60s. Wednesday is expected to be very similar with a slightly wider temperature range. Morning lows start in the mid 40s with highs in the lower 70s. Overall, nearly perfect for late April!

Most of Thursday continues the trend of pleasant weather. Clouds will increase some as temperatures warm a bit, but not uncomfortably so. Lows will be near 50 with highs around room temperature (mid 70s). A southerly wind means moisture increases a bit. The upper level pattern shows northwest flow over the area and a trough entering the Plains, so a little energy in the upper levels could result in a few showers or thunderstorms slipping out of Arkansas into the metro Thursday night or Friday. Friday will be warmer and stickier as highs near 80 degrees once again. Computer models are not unanimous on the chances of precipitation so, for now, we’ll keep them fairly low as Beale Street Music Fest kicks off Friday evening at the Fairgrounds. 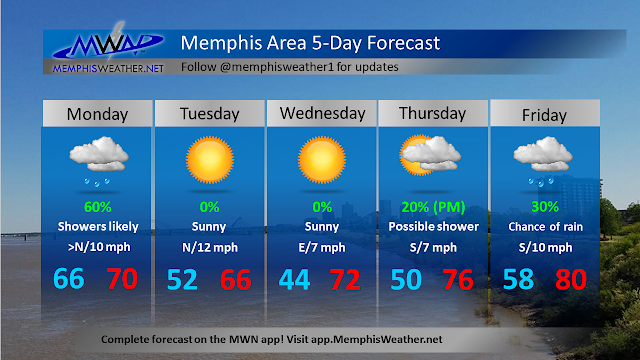 Typically rain chances in early May result in “Memphis in Mud” in Tom Lee Park. But this year, with more concrete at the Fairgrounds (and the event occurring mostly in April!), Music Fest may have less mud, but not necessarily because of a dry forecast. The next front looks to arrive Saturday, bringing rain and probably some thunderstorm chances, as well as sticky conditions. I’m hopeful that the front will move south into Mississippi by Sunday, leaving a drier day to end the weekend. Confidence is only moderate in that happening though. If the front stalls, look for rain chances to increase Sunday. As far as temperatures, mornings appear mild (lower 60s) with highs in the lower 80s Saturday and upper 70s Sunday.