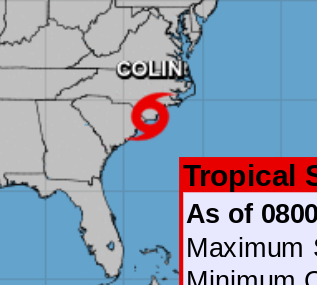 Probably debates going on over it.

It is what it is. 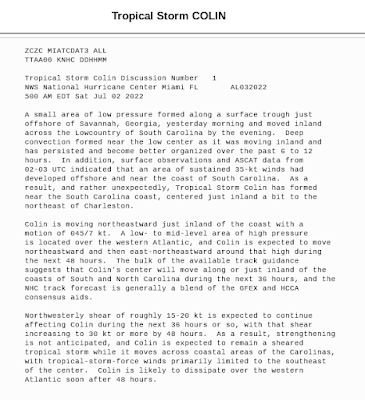 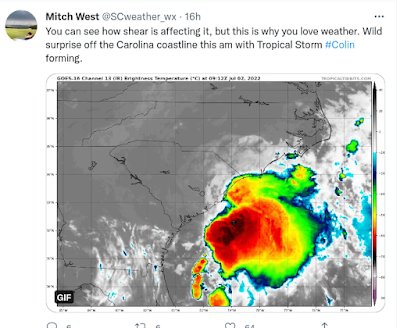 Mitch does SC Weather so he’s been on this…

This is a story as old as time, to quote a song from somewhere, small vortex like tropical storm forms at the tail end of a front or a trough and spins up fast “rather unexpectedly” as the NHC discussion said in their original advisory package. As I was offline over the Jewish Sabbath I missed the details though I had heard my Carolina Blob made the big time and hit the alliteration train by being Colin over Carolina! So many headlines come to mind. Colin Crashes Carolina Beaches on July 4th Weekend!

Seriously though, since the NHC has started naming… oh what did Chris call them “quickies” “minis” I don’t remember but they have named storms that didn’t remain together as long as Colin so if that is what we are doing, good for them they caught Colin on the Carolina Coast (sorry… English major, loves alliteration) Seriously though their job is to take note of closed systems with strong winds and put out watches, warnings or in this case warnings and give information that is important. 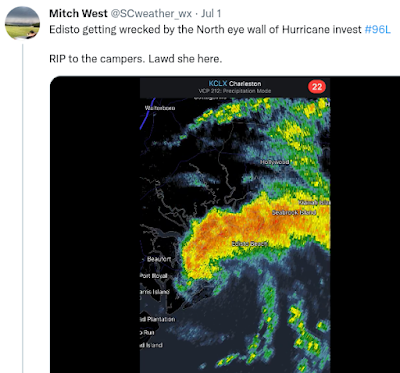 A good tweet but going out on a limb a bit.

But it was obvious this had closed off and formed.

The NHC was playing catch up in real time.

Not the first time.

Small mini systems can do that.

They flare up and then they fade away.

But they can really wreck a beach party!

My husband has this saying  he tells often that “it’s minor surgery when it happens to someone else and major surgery when it happens to you!” and in this case if you lived on Edisto Beach you felt Colin crashing ashore wrecking the beach day many had planned. If you are in Miami and you look up and see what doesn’t seem like a whole lot of weather it’s easy to make fun.

Subtropical Storm Teresa formed for a day last year as well, out in the ocean but it had advisoires. 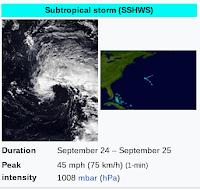 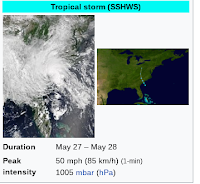 Lastly, in 2016 Tropical Storm Julia formed as it was over land, on a beach somewhere in North Florida and everyone seemed surprised except for me and some chasers who had set up along the beaches between Jacksonville Florida and Ormond Beach. I know this because I had to drive to Miami for a family event and timed the trip to intercept what seemed like a possible storm. I mean we had been tracking that wave since it left Africa and yet the NHC had given it low chances and well suddenly it came together. When I got to the hotel the ground floor rooms were flooded, light objects had been tossed around and the waves were glorious as was the air and the smell of the air and the feel of something tropical.

I’m not going to trash the NHC over this as I am sure many are doing, it’s there and it’s a beach threat on a busy holiday weekend when people need to know it’s there and if they take a small craft out. Yes, it’s a stormy day at the beach but it was also very obviously a closed circulation.

When you are wedded to the models and getting model support for every move you make there will be times something like this happens with a small system that goes undetected in the models. I woke up Friday morning and thought it looked interesting. I’m always watching tail end of fronts or troughs this time of year especially when they are lingering off of Florida near the Georgia Bight. There is just something about the curve of the land from North Florida up through the Outer Banks that cradles a small system such as Colin and the others I mentioned that help them spin and cling to the coastline sometimes. I’ve seen it over and over and so it’s not so surprising.

Understand I woke up Friday Morning and looked at some loops and thought “hmnn” and checked the NHC main page but there was nothing. No purple splotches, no yellow circles and no model discussion. Yet, there had been discussion and possibilities mentioned days back for long range models. The forecast for “RAIN” was heavier than expected and the Upper Level Low to the South of the area was as I said “tickling it” enhancing the rain. I wondered if I was the only one watching this and then I put on Mike on his morning Facebook Live and saw he noticed it too (not surprirsing as we think alike) and I smiled and decided I was not imagining it and going to blog about it.

I love the models, they are often wrong and I want to say more often wrong than right early in the season. Yet, when you don’t discount an area because it doesn’t have model support you are less surprised when the models miss something and something pops up seemingtly unexpectedly. I’ve been pointing to dangling fronts every day for the last month, this is not so surprising. Small, maybe miniscule but it kicked up the surf and many had gusts in the 40 to 50 range on Carolinas beautiful beaches that hosted Tropical Storm Colin.

Enjoy the small surprises such as Colin. In 1935 a small tropical depression turned into a tropical storm that went through rapid intensification and made landfall as a Category 5 Hurricane in the Florida Keys, that was rather unexpected too but very deadly. Luckily Colin was just a meager Carolina Storm reminding you to stock up for the 2022 Hurricane Season.

Next name up is Danielle.

Time will tell where that forms and guessing it won’t be too far away.

Sorry for any typos.

Need to drink some soup.