The past week or so has seen the Mid-South region in a pattern frequently referred to as “northwest flow,” which means that the upper level wind flows from northwest to southeast across the area. There are two main features of northwest flow in our area, and they are related:

Overall we seem to have come through unscathed, as most either side-swiped the metro or fell apart before getting here. We got some rainfall but not excessive amounts, though a few downpours occurred, and temperatures stayed relatively mild due to the accompanying cloud cover of nearby systems. That pattern has ended today and we are quickly transitioning to a new one – the mid-summer “death ridge.”

Arrival of the Death Ridge

Given its name because the strength of upper level high pressure (referred to as a “ridge” of high pressure when it is at upper altitudes) kills off pretty much all rain chances, the “death ridge” as it is colloquially known results in persistent heat, low cloud coverage, and thus minimal precipitation probabilities. Today is transition day as that ridge expands into the area.

While not overly hot – in fact, just near average – it will be much warmer than the average day in the past week and you’ll notice it. (Remember that yesterday at noon we were barely up to 70 degrees with light rain falling.) Some cloud cover is expected, but partly sunny skies won’t hinder the high temperature from reaching the upper 80s. Combined with southerly wind at the surface, dewpoints in the upper 60s will result in sticky air in addition to the building heat. However, get your outdoor chores done today… it’ll still be the coolest day of the next week, or more.

The summer solstice isn’t until June 21, but Mother Nature has other plans. Summer begins tomorrow. As the ridge overhead builds, and high pressure at the surface gains a foothold in the southeast U.S., the heat and humidity will feel like the middle of summer for the upcoming week. Daily high temperatures will be in the mid 90s with morning lows no lower than the mid 70s as southerly wind transports humid Gulf air into the region. There could be a few days where highs and lows are in the upper range of the 90s and 70s, respectively. That will put heat index readings in the mid 100s each afternoon and Heat Advisories may be required. Rain chances will be virtually nil until the latter part of the week.

The early onset (seasonally), and persistence, of the heat will likely result in some heat-related concerns, especially for those not yet acclimated to the heat that must be outdoors. Be sure you are taking plenty of precautions when out – drinking plenty of water before and during exposure and applying sunscreen regularly. And PLEASE be sure that no pets or people are left in vehicles for any length of time! 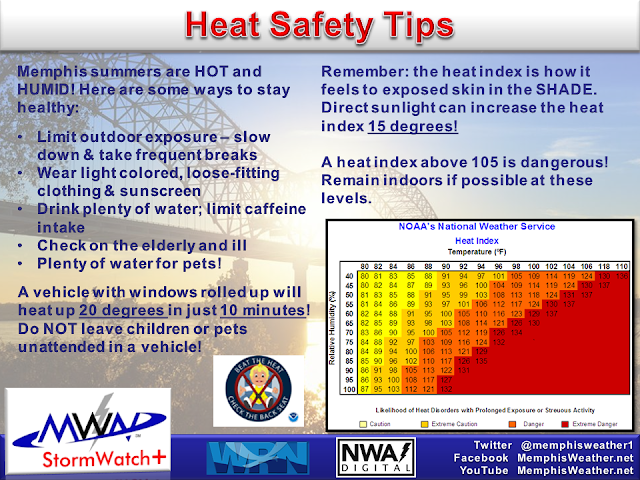 By week’s end, we’ll see a cool front approach, and maybe move through, the area. But with limited deep-level moisture to work with and continuation of the ridging aloft, rain chances will be limited. Perhaps additional cloud cover will keep us a few degrees cooler on a day or two at week’s end, but that remains to be seen. The ridge will reorient a bit by then, but looks to persist through next weekend and into the following week as well. It appears summer’s arrival won’t be fleeting. Stay cool, and play it safe outdoors!