I’ve purposefully not put together a blog on this coming week’s weather pattern until now, because sometimes there’s just too much guesswork to forecast with much confidence. But as we prepare for the week ahead, it’s time to at least address the knowns and unknowns, and perhaps describe why this forecast appears to be so problematic.

A few days ago, models, forecasters, and weather apps were debating whether an Arctic cold front would settle into the Mid-South early this coming week. We now know that that front arrived last night, bringing us overcast and cold conditions today, but will likely move back to our north for the first half of the week. It should reach northwest TN by Monday night, bringing us near average temperatures as wind turns southeast, and perhaps a few peeks of sunshine Monday afternoon. Look for low to mid 50s with any luck tomorrow.

The front should remain just to our north Tuesday and Wednesday. With moist southwest flow aloft over the area, and a disturbance or two moving through, we’ll see minor light rain chances on Tuesday and Tuesday night and slight better precipitation chances Wednesday. A few days ago, we debated a wintry mix on Tuesday. Now, it’s pretty clear that it’s all liquid with low temperatures in the 40s and highs in the low 50s. (There is a chance that the front will move back towards the metro Tuesday, but not far enough south to bring cold air to freeze any light precipitation. The high Tuesday could be optimistic though.)

I’ll come back to Wednesday night through Thursday night in a minute – the details of this time period are definitely NOT known.

Also known (I think): the Arctic front will have finally moved well to our south by Thursday night. That will bring bitterly cold air on gusty north wind and it will likely be dry Friday and Saturday. The magnitude of the cold air (i.e., HOW cold?) is a still a bit of an unknown as well.

Let’s re-visit the Thursday timeframe. Forecast confidence is extremely low for this day, and that’s precisely when the bulk of our precipitation is expected this week. Model data has been consistent in its inconsistency and each model seems to be bullish on its own solution. It’s kind of like a 50-50 split in the Senate. The trick is figuring out which side might blink and in this case, there’s no tie-breaking vote to be cast. The ultimate solution likely lies somewhere in between the extremes, and that’s where our forecast falls until some consensus can be developed (there’s a better chance of that in weather than in politics!). 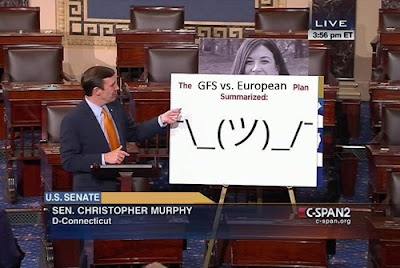 So what specifically do we see in the models? The European model is consistently warmer during the precipitation event Thursday with all rain until the precip departs, then cold and dry. The American GFS model is consistently colder and brings a wintry mix on Thursday that is more favorable for ice than snow, then dries us out as the cold-enough-for-snow air arrives Thursday night, much like the Europeans.

As an example of how different they are, the Sunday morning run of the Euro model has us at 42° Thursday at noon, while the GFS has Memphis at 27° at the same time. Both have precipitation departing around that time. So what is it going to do? With our luck, it’ll be 33° and raining, can I get an Amen?? (I love forecasting in the south!)

The other unknown is how cold we get for Valentine’s Day weekend. While the models again differ on the magnitude of the cold air outbreak, the correct answers are “cold enough to snuggle up to your Valentine,” “cold enough to get some extra firewood for the fireplace”, or just #StupidCold. The more aggressive GFS model drops lows to near ZERO next weekend with highs not far above 10°. That’s obnoxious. 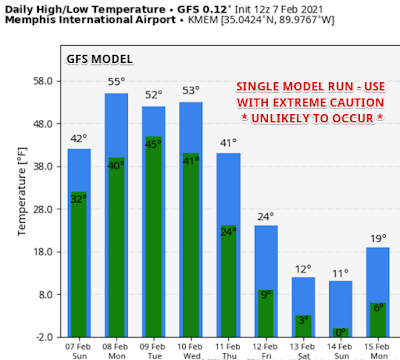 The perhaps-optimistic Euro model has lows in the upper teens to lows 20s and the coldest day (Saturday) with a high of 36°. Again, the reality is likely somewhere in between. For now though, I’m undercutting the Euro model just a bit, because I look at the GFS and just can’t…. In reality, although a full discussion of the topic is likely good material for a separate blog post, meteorologists have access to “ensembles” of these particular models. In short, ensembles take many different iterations of a particular model (say the GFS) and produce a mean, or average, of all of those iterations to give us a more reasonable estimate of what will actually happen. You may have seen “spaghetti plots” of tropical storm tracks, which show all the potential tracks of a storm. Same thing with ensembles, only instead of storm tracks, it’s temperature spread.

In the case of the GFS ensemble, its lows next weekend are close to what the Euro model has (upper teens) and highs in the mid 20s to low 30s. That seems much more plausible, though we can’t rule out the extremes, like the main GFS  model which would allow us to deep-freeze a COVID vaccine in open air.

Looking beyond this week (which should not be done considering we can’t figure out this week!), a general moderation in temps is forecast following Valentine’s Day, but probably still below normal for a minute. We’ll need to closely monitor precipitation chances for a while, as “below normal” in February can still spell T-R-O-U-B-L-E if you don’t want snow (or S-N-O-W-D-A-Y if you do!).

We’ll have more on our social media channels and other means this week, especially as we get closer to Thursday and models hopefully become more agreeable! For the specifics of all of this, see our forecast in the MWN app or MWN website.