RECORD WARMTH: Birmingham reports 84 degrees at mid-afternoon… easily beating the old record high for November 7 of 82, set in 2005. Many other places are in the 80s across Alabama today, about 15 degrees above average for early November. We do note a few spotty showers on radar over the northern third of the state; those will fade after sunset.

We don’t expect much change tomorrow under a strong upper ridge; the high will be in the low to mid 80s with a partly to mostly sunny sky. Showers should be few and far between.

WEDNESDAY THROUGH FRIDAY: A “backdoor” cold front will pass through in dry fashion tomorrow night, and Wednesday will be much cooler. With a sunny sky, the high Wednesday will be in the 67-72 degree range for most communities. Thursday will be another mostly sunny day with a high in the mid 70s. Then, on Friday, we can’t rule out some light rain over the eastern counties of the state as Nicole passes to the east, but the main impact from the tropical system will come over Georgia and the Carolinas. The high Friday will be close to 70.

THE ALABAMA WEEKEND: The coldest air so far this season will invade the state over the weekend as highs drop into the 50s, and lows into the sub-freezing range by daybreak Sunday. Some places across North Alabama won’t get out of the 40s Sunday, and we expect a low in the 20s over much of the state by early Monday morning. The weekend will be dry with sunny days and clear nights.

NEXT WEEK: For now much of the week looks dry with highs in the 50s and lows in the 30s… See the daily Weather Briefing video for maps, graphics, and more details. 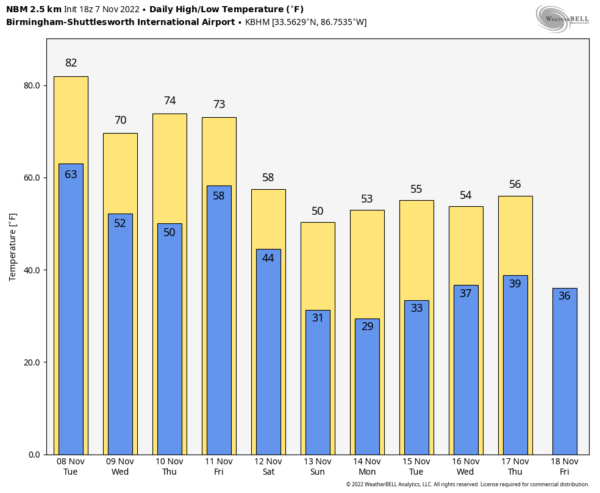 TROPICS: Large Subtropical Storm Nicole, with winds of 45 mph, is about 460 miles east of the Northwest Bahamas. A Hurricane Watch is now in effect for… the Northwestern Bahamas, the East Coast of Florida from the Volusia/Brevard County Line to Hallandale Beach, and Lake Okeechobee.

Nicole is expected to move into the Florida Peninsula (not the panhandle!) late Wednesday night or early Thursday morning, potentially as a category one hurricane. Do not focus on the exact track of Nicole since it is expected to be a large storm with hazards extending well to the north of the center, and outside of the cone, and affect much of the Florida peninsula and portions of the southeast U.S.

Most of the wind and rain associated with Nicole will stay east of Alabama.

ON THIS DATE IN 1957: A historic tornado outbreak impacted southeast Texas and southwestern Louisiana. Ten people were killed.

ON THIS DATE IN 2001 Typhoon Lingling struck the southern Philippines, killing 171 people with 118 missing in Camiguin. The typhoon then struck Vietnam 5 days later, killing an additional 18 people.