SHARPLY COLDER: Much colder air will roll into Alabama with a brisk north wind; temperatures will hold in the 40s over the northern half of the state, with low to mid 50s for the southern counties. As a deep, cold core upper trough passes overhead, a few sprinkles or snow flurries are possible… but no impact or accumulation is expected. Morning clouds will give way to intervals of sunshine this afternoon. Then, tonight, with a clear sky temperatures will fall well below freezing… most places will be in the 20s early tomorrow morning.

The weekend will feature sunny cool days and clear cold nights. The high tomorrow will range from the mid 40s across the Tennessee Valley to the mid 50s near the coast. Highs Sunday will be in the 50s and 60s after another sub-freezing start.

NEXT WEEK: The day Monday will be dry, but showers move into the state Monday night and Tuesday ahead of a surface front. The front will stall out across Central Alabama Tuesday, and a few waves of low pressure will roll along the front, keeping the weather unsettled for much of the week. Expect periods of rain Wednesday and Thursday with some thunder possible. At this point it looks like there will be very little surface based instability, meaning no significant chance of severe storms through the week. The weather should trend drier by Thursday night and Friday, and the week looks fairly mild with highs in the 65-72 degree range. See the daily Weather Briefing video for maps, graphics, and more details. 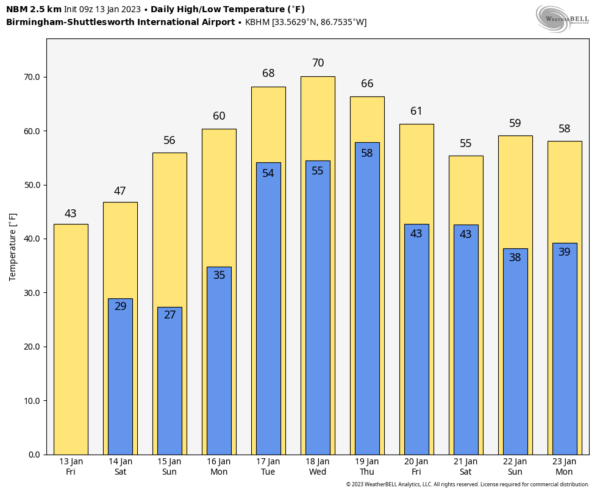 THURSDAY’S STORMS: Yesterday’s system clearly overperformed in terms of the number of tornadoes… it looks like we have tornado damage in at least a dozen counties… Winston, Lawrence, Morgan, Sumter, Greene, Hale, Dallas, Autauga, Elmore, Coosa, Tallapoosa, and Chambers. It will take several days for the NWS to complete their survey work.

ON THIS DATE IN 1862: Known as the Great Flood of 1862, a series of storms from December 1861 to January 1862 produced the largest flood in the recorded history of Oregon, Nevada, and California. Estimated property damage in California alone was $10 million in 1862 dollars. More than 200,000 head of cattle lost their lives. The State of California went bankrupt, and the economy evolved from ranching to farm-based.

ON THIS DATE IN 1982: After a period of very cold weather with single digit temperatures, a winter storm brought some snow, but mostly freezing rain to the state. The precipitation arrived about 8 hours earlier than anticipated in the Birmingham area and quickly changed over to a mix of freezing rain and sleet that turned roads in skating rinks. Thousands of motorists had to abandon their vehicles on roads and hike home or spend the night in shelters. Brookwood Village mall became a huge shelter. So many wrecks occurred that the Birmingham Police Department could not answer the calls for accident investigation.

As temperatures hovered near the freezing mark through the night, freezing rain created a thick coating on all exposed objects. Trees snapped, pulling down power lines and putting as many as 750,000 Alabamians in the dark. A state of emergency was declared in Alabama and National Guard Armories were opened to serve as shelters. Some people had no power for weeks, timber damage in the state was extensive. Twenty Alabamians were dead and another 300 injured and damage totaled $78 million because of the 1982 winter storm.