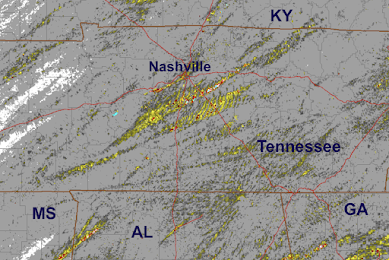 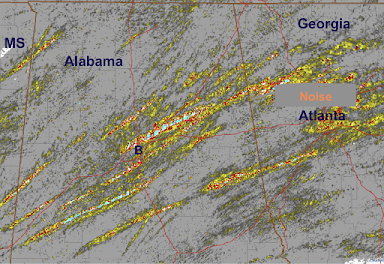 Doppler radar can sense rotation in storms but, unless there is lofted debris, cannot directly ascertain whether that rotation has reached the ground. That stated, there was a strong correlation between yesterday’s rotation and corresponding tornado tracks (I covered up some noise in NW Georgia; there is also noise just south of downtown Atlanta).

The brighter the colors, the stronger the rotation.

The map shows remarkably long-tracked tornadoes. Pending the completion of the damage survey, the Birmingham NWS office believes that one of the tornadoes may have been on the ground at least 100 miles. This is what we meant when we forecasted “violent, long-tracked tornadoes.” Those are important because they are usually the type that cause the most deaths.

The tracks show that Birmingham (B) was struck both north and south of downtown. The suburbs southwest of Atlanta were also struck after midnight — an extremely dangerous situation given that nighttime tornadoes cause 2.5 times more deaths than tornadoes during the day.

If you have a chance, please contribute to legitimate charities (not the Red Cross which is poor for tornadoes) like the Salvation Army to help the victims recover more quickly.

The Severe Thunderstorm Watch Has Been Allowed to Expire : The Alabama Weather Blog