Because I’ve spent my entire adult life making forecasts — primarily about the future state of the atmosphere and corresponding effects; and in recent years also about diseases and economics — the last few weeks I have been asked, over and over, what I believe the outcome of the election will be. Here is my answer….

The forecast below corresponds to my thoughts on the subject. 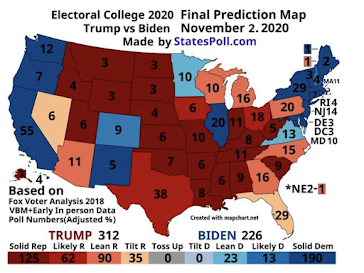 I believe the race, in the last week, has strongly broken in Trump’s favor. The primary reason is the (now well-verified) stories confirming Mr. Biden’s ties to China, Russia and the Ukraine (here and here, as two examples). My impressions are reinforced by information such as this. I believe the Republicans will retain control of the Senate and will pick up a net 10-15 seats in the House. Because I live in Kansas and so many have asked, I forecast Roger Marshall will win the open U.S. Senate seat.

Of course, the question is whether President Trump win enough votes to overcome what University of Tennessee law professor Glenn Reynolds refers to as the “margin of fraud.” Before you react negatively to that comment, consider this tweet posted earlier today from the Attorney General of Pennsylvania: 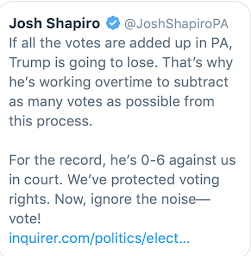 President Trump is “going to lose”? Before the first vote is counted? Per the article, Mr. Shapiro has presented no evidence Mr. Trump is working overtime to “subtract votes.” [Note: if he has such evidence, it should be immediately presented!] My interpretation of what General Shapiro has written is that he is working a public relations angle to create an excuse for tampering with the votes, either through his office or his allies’. This is an example of what conservatives mean by the margin of fraud.

The Associated Press announced tonight they will not “call” a state until they are ‘certain’ which probably means they will use their historic techniques if Biden wins a state but will wait until the court battles are over if it is a large state going for President Trump. Still, if the margin is large enough, the AP will have to call it (I hope).

Hopefully, regardless of whether President Trump or former Vice President Biden is elected, we’ll know by sunrise Wednesday. As we saw in 2000, a protracted election outcome does no one any good.