We in Wichita were certainly looking forward to again hosting the NCAA’s men’s basketball tournament in March, 2021. The Indianapolis-based NCAA announced today that a single city — likely Indy — will be chosen to hold the entire tournament because of COVID.

To me, this decision does not make sense.

The health risk to healthy young men around the age of twenty is very low to begin with (see graph), I don’t understand the need for a bubble. 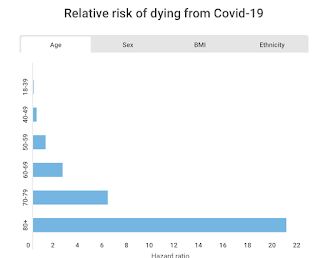 What about people older than twenty? People like me (60’s) or older or in other high-risk groups should not attend until vaccinated.

Given two vaccines are supposed to be available by year’s end, and that 80,000,000 are supposed to be able to be vaccinated by March, we have roughly 1/3rd of the U.S. population invulnerable to the disease with the number rising rapidly. If herd immunity is achieved at 43%, then the residual risk will be starting to dwindle around the time of March Madness.

As far as I am concerned, the “single city” is not justified by the science or the statistics.

But assuming it needs to be a “bubble” setting, why does the NCAA have to pick its home city? Seems like a form a nepotism. The NCAA made the questionable decision, why should its home city benefit? Why not have a random drawing among the cities that are being cancelled? After Wichita and twelve other cities have made plans and expenditures based on having the tournament in March. Have a random drawing to decide.

I’ve read in the sports media that Indy is “ideal.” That does not seem to be the case based on the reported criteria. Let me make the case from Wichita’s point of view as we were one of the 2021 cities losing the first two rounds.

For example, they are said to want a city that is “centrally located.” There’s no city more central than Wichita. 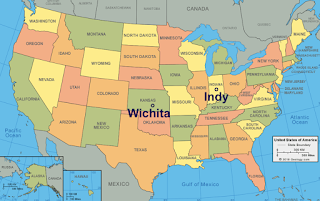 That matters because Indy would be a full extra day’s drive from the West Coast. The geographic center of the 48 contiguous states is in Kansas and the population center of the U.S. is in southwest Missouri. In regard to “central,” Wichita is the ideal choice.

Indy, as Sports Illustrated points out, is not an airline hub. Neither is Wichita. However, we are served by every major airline and that was evaluated in the decision to have the first two rounds here. The participating teams fly their own aircraft. We have one of the best, most modern, airports in the nation.

Sports Illustrated says the NCAA wants two large arenas in the city it chooses. We have both Intrust Bank Arena (where the first two rounds were to be played) and Wichita State’s Koch Arena.

I could go on but you get the picture. Other cities, I’m sure, could make their case.

Please note: I am not saying the entire tournament should necessarily be played in Wichita. I am saying there are other choices beside Indy. Since the NCAA is pulling the rug out from under 13 cities that have made hosting plans, one of those should be selected if they meet the criteria rather than defaulting to Indy for the mere convenience of the NCAA.