PLEASANT MORNING: Temperatures have dipped into the 60-65 degree range over much of North Alabama early this morning thank to a drier airmass that moved in last night. The sky is mostly fair at daybreak, and there is nothing on radar. Most of Alabama will be dry today, with just a few isolated showers over the eastern and southern counties, and the high will be in the mid 80s. Clouds will increase late tonight as moisture surges northward.

TOMORROW AND THE WEEKEND: Wet weather returns tomorrow thanks to deep moisture in place and a broad surface low over Southeast Louisiana. Expect period of rain and a few thunderstorms… not an “all day/all night” rain, but when the rain does come it could be heavy in spots. Temperatures hold in the 70s all day due to clouds and showers.

The weather stays a bit unsettled over the weekend… we are forecasting scattered to numerous showers and thunderstorms Saturday and Sunday with only a limited amount of sun both days. Highs will be in the 80-84 degree range. Rain amounts between tomorrow and Sunday will be average around one inch, but some spots could see more.

NEXT WEEK: A dry, continental airmass begins to move into the state Monday, with showers mainly over East and South Alabama. Then, we will be rain-free for the rest of the week with sunny days, cooler nights, and lower humidity values. Highs will be in the 80s, lows mostly in the 60s… but many spots over North Alabama will be in the refreshing 50s early Tuesday and Wednesday morning. The dry weather will likely persist into the following weekend (September 17-18)… See the daily Weather Briefing video for maps, graphics, and more details. 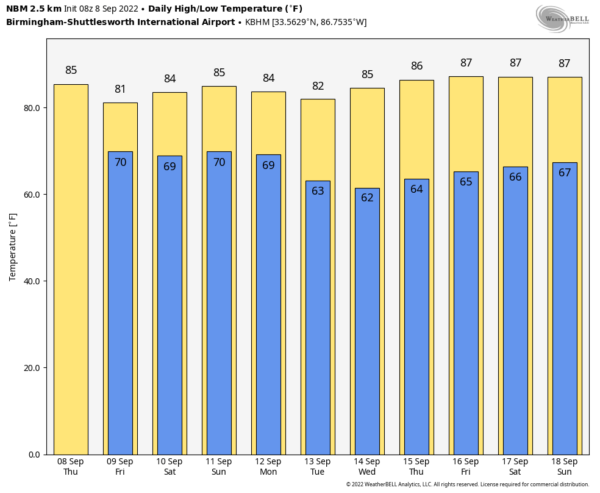 TROPICS: Earl is now a category two hurricane in the Atlantic with winds of 105 mph; it is expected to become a major category three hurricane later today as it passes east of Bermuda, where tropical storm conditions are likely this afternoon and tonight. From there Earl will move into the North Atlantic, becoming post-tropical this weekend.

Danielle is a tropical storm in the North Atlantic and will become post-tropical later today. And, NHC is monitoring two tropical waves in the central and eastern Atlantic, but if those develop they will turn north and then northeast. Still no sign of any tropical systems threatening the U.S. Gulf Coast or Atlantic coast for the next 7-10 days. 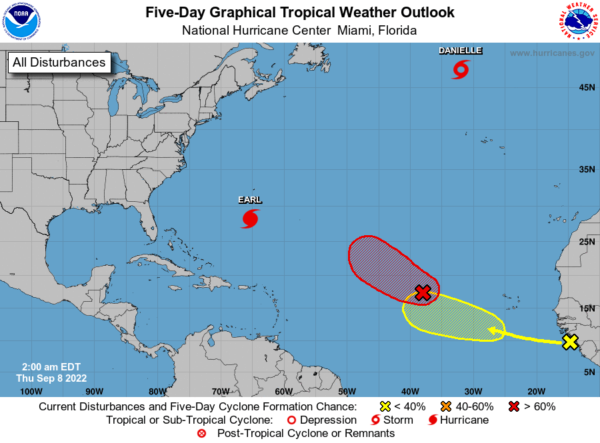 ON THIS DATE IN 1900: A Category 4 storm made landfall in Galveston, Texas. This hurricane killed between 6,000 and 12,000 individuals, making it the deadliest US Atlantic hurricane on record. The number most cited in official reports is 8,000. Most of these deaths occurred in and near Galveston after the storm surge inundated the coastline with 10 to 15 ft of water. In addition to the number killed, the storm destroyed about 7,000 buildings of all uses in Galveston, which included 3,636 demolished homes; every dwelling in the city suffered some degree of damage. The hurricane left approximately 10,000 people in the city homeless, out of a total population of fewer than 38,000.

ON THIS DATE IN 1925: In September 1925, South Carolina was in the middle of one of the most widespread and disastrous droughts in the state’s history. The NWS Co-op station in Calhoun Falls reported 11 days above 100°F with a maximum temperature of 111°F on this day.