RADAR CHECK: We pretty much have a clean sweep on radar this afternoon as drier air continues to filter into Alabama. A few isolated showers are still possible this evening over the southern half of the state, but most places will be dry. Look for a clear sky tonight with a low in the 55-62 degree range early tomorrow morning.

Dry weather is the story for the rest of the week with sunny days and fair nights. And, get ready for the hottest weather so far this year as the upper ridge over the Gulf Coast region gets stronger. We project a high in the upper 80s tomorrow, low 90s Wednesday, and mid 90s Thursday and Friday.

THE ALABAMA WEEKEND: The ridge weakens, and a surface front will approach from the north, so the chance of showers and storms will return to the forecast over the weekend. This won’t be an “all day” kind of rain, but a passing shower or storm is a pretty good possibility. Higher rain coverage will likely come on Sunday, and highs will drop back into the 80s.

NEXT WEEK: The front will wash out Monday over North Alabama, and the week looks fairly routine for the end of May with warm humid days and the daily chance of “scattered, mostly afternoon and evening showers and thunderstorms”. Highs will be mostly in the 80s, but low 90s are possible by the end of the week. See the Weather Xtreme video for maps, graphics, and more details. 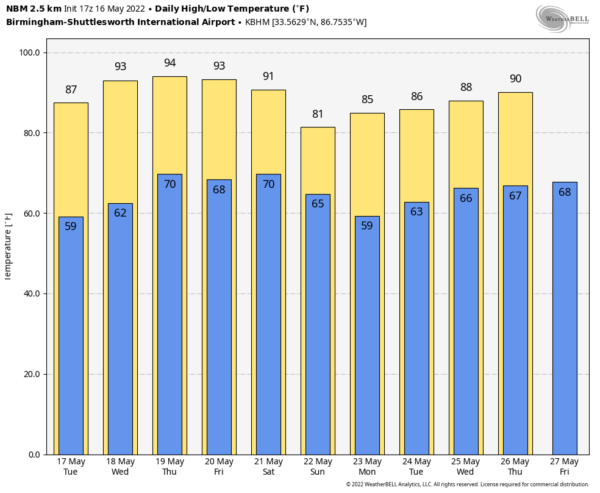 TROPICS: The hurricane season in the Atlantic basin doesn’t officially begin until June 1, but the National Hurricane Center is now issuing daily tropical weather outlooks. For now all is quiet, and tropical storm formation is not expected at least for the next five days.

ON THIS DATE IN 1989: Thunderstorms developing ahead of a cold front produced severe weather in the south-central U.S. Thunderstorms spawned twenty tornadoes, and there were 180 reports of large hail and damaging winds. A tornado in Cleburne, Texas caused thirty million dollars damage. A violent F-4 tornado touched down near Brackettville, Texas and a strong F-3 tornado killed one person and injured 28 others at Jarrell, Texas.