QUIET PATTERN CONTINUES: Alabama’s weather will stay mostly dry through the weekend, although a few isolated showers are possible tomorrow over the southern half of the state. Partly sunny days, mostly fair nights, and highs will remain generally in the 70s. A few spots over West Alabama could touch 80 Sunday afternoon. Lows over the weekend will be in the low 60s.

NEXT WEEK: Monday still looks dry for most of the state, but we will bring in some risk of showers beginning Tuesday, and lasting through the end of the week. The showers should be fairly scattered in nature during the mid-week period, and rain coverage at the end of the week will all depend on the behavior of Tropical Storm Eta, which will be in the Gulf of Mexico. Highs will hold in the 70s through the week… See the Weather Xtreme video for maps, graphics, and more details.

TROPICS: Eta is now back over the Caribbean after a journey through Central America, and is expected to become a tropical storm later this morning. The latest NHC forecast takes the system over Cuba Sunday, and then it takes a left turn, moving into the southern Gulf of Mexico Monday. 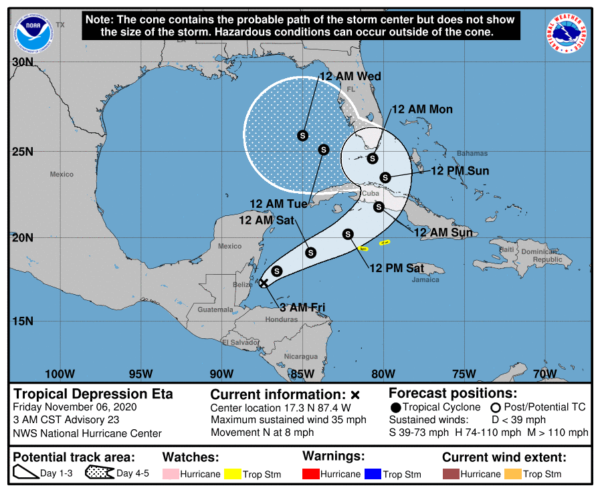 The impact, if any, on the Central Gulf Coast remains unclear. Eta could turn northeast, impacting mainly the Florida Peninsula, or it could drift northward toward the Panhandle. Sea water temperatures continue to cool over the northern Gulf, and the main impact will be from heavy rain, most likely, along the track. We will have much better clarity on the ultimate destination of the system over the weekend.

The rest of the Atlantic basin is quiet; hurricane season ends on November 30.

ON THIS DATE IN 1977: The Kelly Barnes Dam, located above the Toccoa Falls Bible College near Toccoa, Georgia, failed in the early morning hours of November 6, 1977. Thirty-nine people died in the resulting flood, which inundated part of the campus including a trailer park.

ON THIS DATE IN 2005: The deadliest tornado to strike Indiana since April 3, 1974, occurred around 2 am. A single EF3 tornado inflicted 24 fatalities, 238 injuries, and nearly 90 million dollars in damage with a path length of 41 miles. This storm moved in a northeasterly direction from just north of Smith Mills Kentucky to Gentryville, Indiana, and crossed the Ohio River three times. Most of the damage occurred as the tornado passed southeast of the city of Evansville.