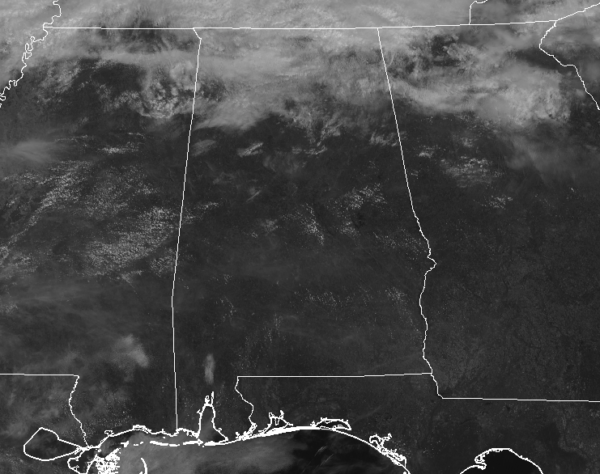 MAINLY DRY & WARM FOR CENTRAL ALABAMA TODAY
As of 11:00 am, skies across Central Alabama were mostly sunny except for the extreme northern parts of the area where clouds from a stalled surface boundary continue to hang out. No shower activity is on radar at the moment. Those clouds will continue to stay in that general area and a few showers may be possible this afternoon along and north of the Tennessee River. Nearly all of Central Alabama should remain dry with mostly clear to partly cloudy skies, but one of those stray showers may creep into the extreme northern parts of the area. Highs will top out in the lower 80s while overnight lows dip down into the lower to mid-50s.

NICE & WARM FOR SUNDAY
Much of the same for Sunday, but the boundary will drift back northward before our next system begins to move into the area before sunrise on Monday morning. Skies will be partly to mostly cloudy with highs reaching the upper 70s to the lower 80s.

A STORMY START TO THE WORK WEEK
Monday’s weather will be a little stormy as we are expecting the day to start off with some scattered showers before a cold front pushes into the area from the west just before the afternoon. The line of storms will slowly move across the western half of the area but will be in the process of weakening and the activity will begin to dissipate somewhat. While the SPC does not have a formal risk area up for Monday at this point, NWS Birmingham has the western and northwestern parts of Central Alabama (west of a line from Tuscaloosa to Jasper) in a Marginal Risk for severe storms. Threats will be mostly from isolated damaging wind gusts up to 60 MPH and quarter-size hail. A brief spin-up tornado may be possible as well, but odds are very low at this point. Highs will be in the lower 70s to the lower 80s.

That front becomes more horizontal across Central Alabama that will keep a chance of showers and a few thunderstorms in the forecast throughout the day on Tuesday. No severe weather is expected at this time. Highs will be in the mid to upper 70s. 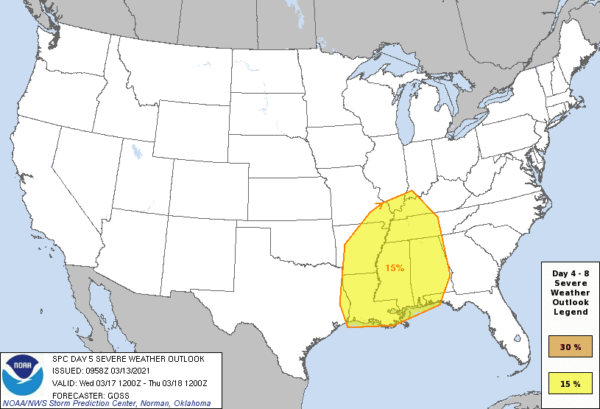 SPC has nearly all of Alabama in a 15% chance of severe storms occurring within 25 miles of a given point for Wednesday, which equals a Slight Risk.

STRONG TO SEVERE STORMS POSSIBLE ON WEDNESDAY
Wednesday will be a day we’ll need to watch as we may have two waves of rain and storms to put up with. During the early morning hours, we’ll have the stalled out cold front move back northward through the state as a warm front. We could have some strong storms form along that front that may produce damaging wind gusts and some hail. Showers and storms will become more scattered throughout the late morning through the afternoon hours, but instability will be rising well above 1,000 J/kg. The crossover of winds from the surface up to 18,000 feet show that there will be veering of winds from the south to the east, which will help promote rotating updrafts. We’ll have another line of storms move through during the late-night and into the overnight hours. For now, the window for stronger to severe storms look to be from 12:00 pm through at least midnight. At this point, all modes of severe weather look to be possible, but let’s get through Monday’s event, so we can really focus on Wednesday. Highs will be in the 70s.

A QUIETER & COOLER END TO THE WORK WEEK
After the front and rain moves out of the area during the morning hours on Thursday, skies will begin to clear, but winds will remain quite breezy at times. Afternoon highs will be back down into the lower 60s to the lower 70s across the area.

Friday will be cooler even with more sunshine and only a few passing clouds. Highs will be in the upper 50s to the mid-60s across the area from northwest to southeast.