COOL START: Here are some temperatures over North Alabama early this morning as we are enjoying a touch of fall in the air on this first morning of September…

Expect another mostly sunny day ahead with a high in the low 90s; showers will be confined to the southern quarter of the state, and even there most places will remain rain-free.

TOMORROW AND THE HOLIDAY WEEKEND: Moisture levels rise tomorrow, and we will bring back the chance of a few scattered showers and storms during the afternoon and evening hours; odds of any one spot getting wet are 30-40 percent, and the high will be in the 87-90 degree range with a mix of sun and clouds.

Then, over the weekend, the weather will be rather unsettled with scattered to numerous showers and thunderstorms Saturday through Monday. This doesn’t mean a “washout”, and the sun will peek out at times, but be ready for occasional showers along with some thunder. Most (but not all) of the showers will come from noon to midnight, and highs will be in the low to mid 80s. No way of knowing in advance the exact location and timing of the showers; you just have to watch radar trends if you have an outdoor event planned. Rain amounts of 1-2 inches are likely over the these three days for most places across Alabama.

NEXT WEEK: Showers become fewer in number Tuesday through Friday as an upper ridge builds; expect partly sunny days with a few scattered showers and storms around during the afternoon and evening hours. Highs will be mostly in the mid to upper 80s… See the daily Weather Briefing video for maps, graphics, and more details. 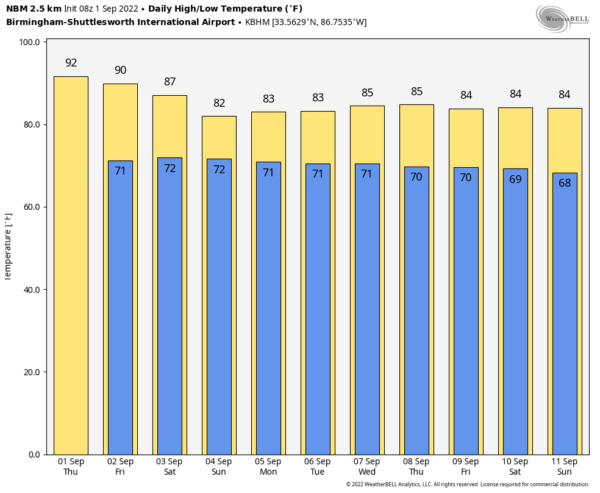 TROPICS: Tropical Depression Five has formed in the North Atlantic; it could become a hurricane over the next few days, but it will remain far from land. 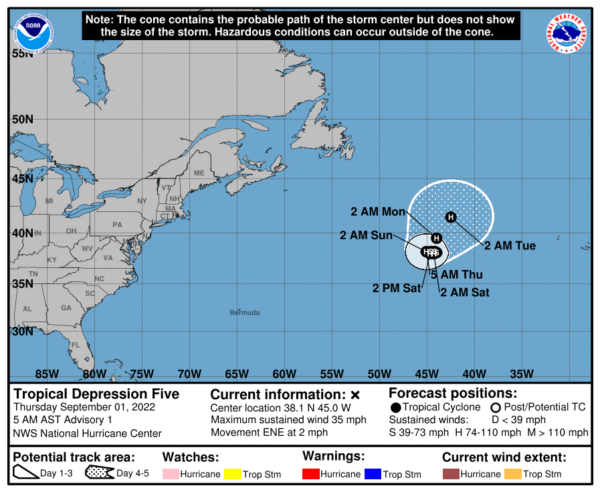 NHC is monitoring two other tropical waves… one is in the Atlantic several hundred miles east of the Leeward Islands; this one has a high chance of becoming a tropical depression or storm over the next few days, but it will turn north, and then northeast over the open Atlantic well east of the U.S. The other wave is in the far eastern Atlantic… it has a brief window for some development before environmental conditions become unfavorable for further development. If by chance anything develops here, it will also remain far from land.

No tropical systems will be anywhere close to the U.S. for at least the next 5-7 days. 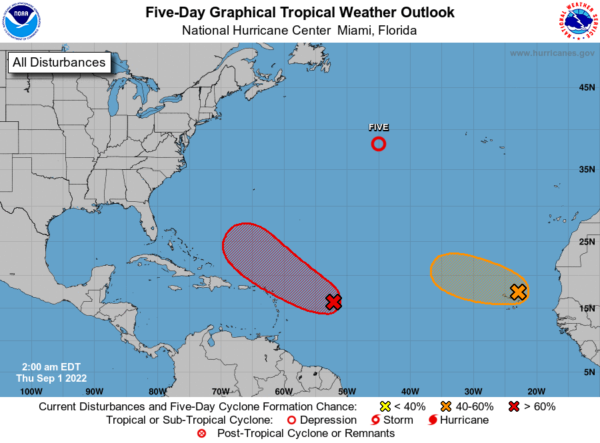 FOOTBALL WEATHER: UAB kicks off their season tonight, hosting Alabama A&M at Protective Stadium in downtown Birmingham (7p CT kickoff). The sky will be clear with temperatures falling from near 83 at kickoff, into the 70s by the second half.

ON THIS DATE IN 1859: One of the largest geomagnetic storms on record was underway. Known as the “Carrington Event” (named after British astronomer Richard Carrington, who recorded the solar flare), it was the most intense geomagnetic storm in recorded history, peaking from 1 to 2 September 1859 during solar cycle 10. It created strong auroral displays that were reported globally and caused sparking and even fires in multiple telegraph stations. A geomagnetic storm of this magnitude occurring today would cause widespread electrical disruptions, blackouts, and damage due to extended outages of the electrical power grid.

ON THIS DATE IN 1974: Lt. Judy Neuffer became the first female to fly a Hurricane Hunter aircraft through the eye of a hurricane.