QUIET MONDAY: Alabama’s weather will stay calm today; look for a high in the mid 70s this afternoon with potential for a little sun through the stubborn clouds later in the day. The average high for Birmingham on October 26 is 72. The high tomorrow will be close to 80 with more clouds than sun. The weather for most of the state will remain dry, although a few scattered showers could show up by tomorrow afternoon over South Alabama.

HERE COMES ZETA: Eyes are on Tropical Storm Zeta in the Caribbean this morning; it should be a hurricane by the time you read this as it approaches the tip of the Yucatan Peninsula. As moves into the northern Gulf of Mexico Wednesday, it should drop below hurricane strength again due to increasing shear and the cooler shelf waters. NHC is forecasting Zeta to arrive on the Southeast Louisiana coast late Wednesday or Wednesday night. 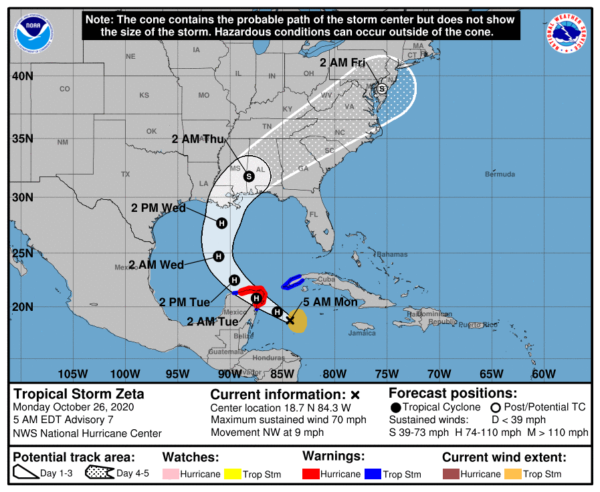 COASTAL IMPACT: Dangerous rip currents are likely on the coast from Gulf Shores to Panama City Beach tomorrow through Wednesday night; expect red or double red flags. Winds on the Alabama Gulf Coast Wednesday night could gust as high as 50 mph; sustained winds of 20-40 mph are likely. Gusts over the Florida Panhandle could reach 35-40 mph. There is also some risk of brief, isolated waterspouts or tornadoes Wednesday and Wednesday night along the coast.

Zeta will be moving quickly, and will limit rain amounts. Rain totals for the coast will be in the 1-3 inch range. Also, some storm surge flooding is possible on the Alabama coast.

INLAND ALABAMA: Rain becomes widespread across Alabama after midnight Tuesday night, and Wednesday will be wet with rain much of the day. Rain continues Wednesday night, and will end from west to east during the day Thursday. Rain amounts will also be in the 1-3 inch range for most of inland Alabama; for now no major flooding issues are expected. 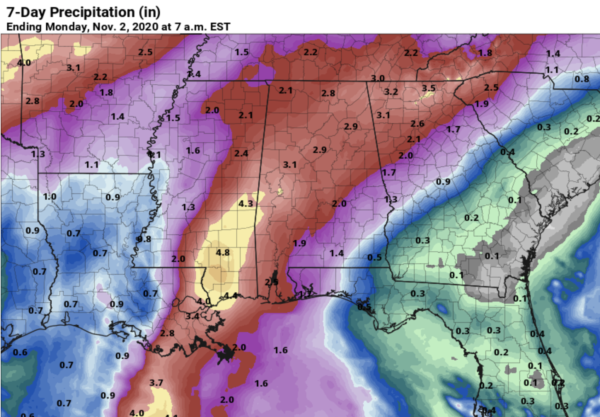 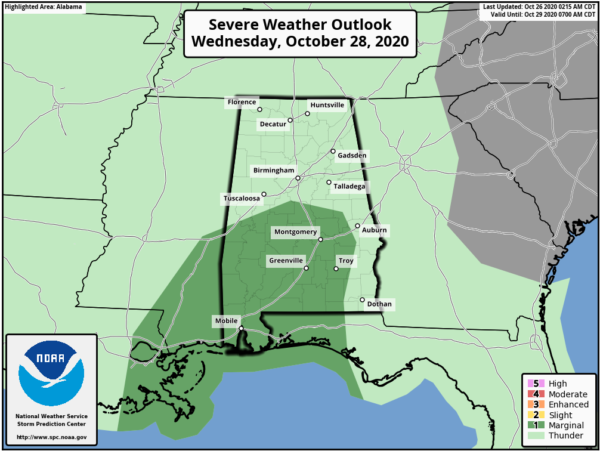 Remember, forecasts with tropical systems can, and probably will change, so keep up with the latest on Zeta as it nears the coast.

FRIDAY AND THE WEEKEND: Much drier air rolls into Alabama Thursday night, and Friday promises to be a delightful day with ample sunshine and a high around 70 degrees. A few clouds could show up over the Halloween weekend thanks to an upper trough, but for now the air looks too dry for rain. Highs over the weekend will be in the low 70s, with lows in the 48-54 degree range… right at seasonal averages.

NEXT WEEK: For now most of the week looks dry with temperatures very close to where we should be in early November; highs in the low 70s, with lows in the 40s and 50s. See the Weather Xtreme video for maps, graphics, and more details.

ON THIS DATE IN 1952: There have been thousands of weather reconnaissance and research flights into hurricanes in the Atlantic and Pacific since the mid-1940s. There have been several close calls, but only four flights have been lost. A B-29 Super-fortress flight into Super Typhoon Wilma 350 miles east of Leyte in the Philippines disappeared on this date. No trace was ever found of the plane or crew. In the last report, the flight was in the Super typhoon’s strongest winds, which were around 160 mph.