ISOLATED SHOWERS LATER TODAY: Hot, humid summer weather continues across Alabama today and tomorrow with partly sunny days, fair nights, and few “pop up” afternoon and evening showers and storms. Odds of any one spot seeing rain both days are 15-25 percent, and highs will be in the 90-95 degree range, which is what you expect in late July.

FRIDAY AND THE WEEKEND: Scattered showers and storms should become more numerous over the northern half of the state Friday afternoon as a weak surface front moves down toward the Alabama/Tennessee border. It won’t rain everywhere, but a number of “summer soakers” are likely from about 2:00 until 10:00 p.m. The high Friday will be in the 88-92 degree range. SPC has the far northern part of the state in a “marginal risk” (level 1/5) of severe thunderstorms Friday due to the potential for strong winds. South Alabama will be hotter and drier with only isolated showers. 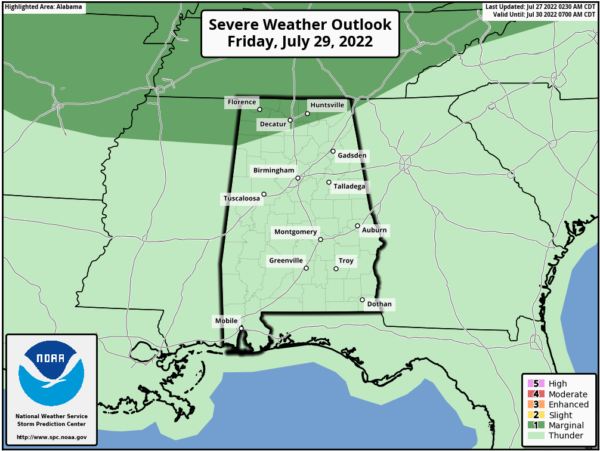 For the weekend, the higher coverage of scattered showers and storms will remain over the northern half of the state. Otherwise, partly sunny days with highs close to 90 degrees. Chance of any one location getting wet Friday is 55-65 percent over the northern counties, dropping to 30-40 percent Saturday and Sunday.

NEXT WEEK: Look like routine summer weather through the week as August begins. Hot, humid days with “scattered, mostly afternoon and evening showers and storms”…. highs in the low to mid 90s. See the daily Weather Briefing video for maps, graphics, and more details. 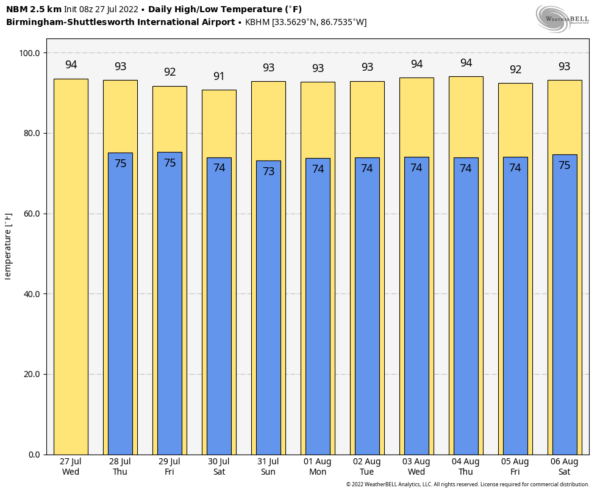 TROPICS: Conditions remain very calm across the Atlantic basin, and tropical storm formation is not expected through the next five days.

RAIN UPDATE: Here are rain totals since January 1, and the departure from average…

ON THIS DATE IN 1819: A hurricane affected the coast from Louisiana to Alabama. New Orleans was on the fringe of the storm and suffered no severe damage. Ships at the Balize experienced a strong gale for 24 hours that only grounded three ships. Lakes Pontchartrain and Borgne rose five to six feet during the storm, with farms along the lakes flooded by the storm tide. Forty-one lives were lost on the U.S. Man of War schooner Firebrand, a 150-ton gunship, while it lay off the west end of Cat Island.

ON THIS DATE IN 1943: A “surprise,” Category 2 Hurricane moved ashore near Galveston, Texas. Due to World War II, all news underwent censorship, including any weather reports making this the surprise storm. The hurricane killed 19 people and caused millions of dollars in damages. Of particular note, Lieutenant Colonel Joe Duckworth and Lieutenant Ralph O’Hair flew an AT-6 Texan into the eye of the hurricane, becoming the first flight into the eye of the storm