FOGGY START FOR SOME: A dense fog advisory is in effect for parts of Central and Southwest Alabama early this morning; that fog will dissipate by mid-morning. Otherwise it is a calm morning across Alabama with very few showers on radar at daybreak. The sky will be occasionally cloudy today, with scattered showers and storms forming by midday, and continuing through the evening hours. Rain won’t be as widespread as recent days, and heat levels rise a bit with highs in the mid to upper 80s. The chance of any one spot seeing rain later today is 40-50 percent. But keep in mind where showers do form they will be efficient rain producers.

The weather won’t change much over the weekend. Partly sunny days with scattered showers and storms around, most active from around noon to midnight. Chance of any one location getting wet both days is 25-35 percent, and the high will be pretty close to 90 degrees as summer heat returns to the state. Very routine weather for late August in Alabama.

NEXT WEEK: We will stick with a persistence forecast through the week. Classic late summer weather with partly sunny days and “scattered, mostly afternoon and event showers and thunderstorms”. Highs will be in the upper 80s most days. It is still too early for a specific forecast for the Labor Day weekend, but we stress there is still no signal in global models of any high impact weather event for Alabama and the Central Gulf Coast region (Gulf Shores to Panama City Beach)… for now it looks like the typical mix of sun and scattered storms. See the daily Weather Briefing video for maps, graphics, and more details. 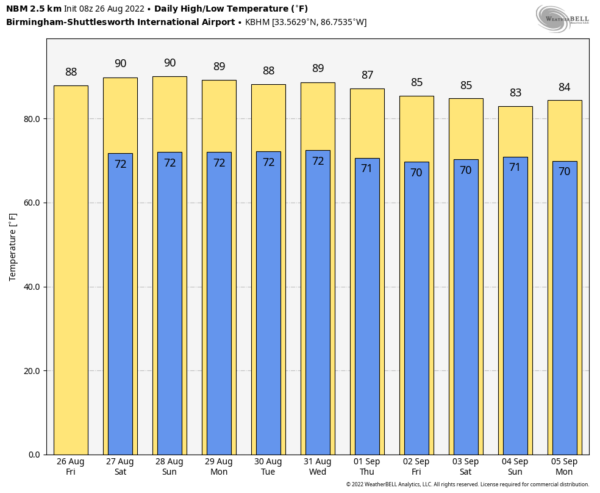 TROPICS: NHC continues to monitor two tropical waves this morning. The first one is over the eastern Caribbean Sea, and is producing minimal shower and thunderstorm activity. This system is expected to move westward at about 15 mph during the next several days, and environmental conditions could become more conducive for slow development when it moves across the central and western Caribbean Sea by early next week.

The other one is in the eastern Atlantic near and south of the Cabo Verde Islands… it is producing a large area of disorganized showers and thunderstorms. Environmental conditions could support some slow development of this system through early next week while it moves westward across the eastern and central tropical Atlantic at 15 to 20 mph.

The chance of development with both waves over the next five days is only 20 percent, and the rest of the Atlantic basin remains very quiet. 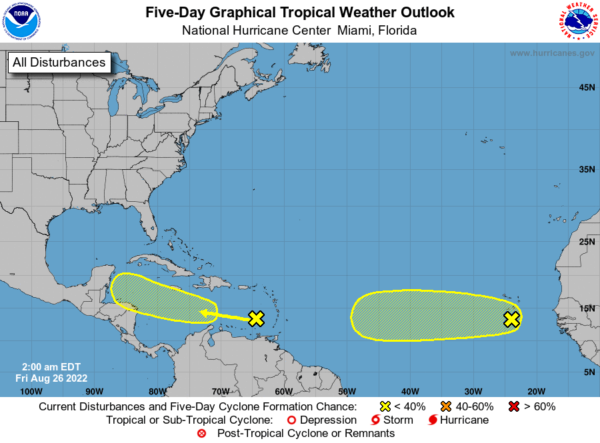 FOOTBALL WEATHER: For the high school games tonight, a few scattered showers will be around, mostly during the first half of the games. It won’t rain at every stadium, but I would take the rain gear just on case. Temperatures will be near 80 at kickoff, falling into the upper 70s during the second half.

Saturday, Jacksonville State will take on Stephen F. Austin at Cramton Bowl in Montgomery (2:30p CT kickoff on ESPN)… the sky will be partly sunny with some risk of a passing shower or storm during the game. Kickoff temperature near 89, falling back into the low 80s by the final whistle.

ON THIS DATE IN 1976: A weak tornado touched down briefly in the Hockley Hills near Kiana, AK, about 29 miles north of the Arctic Circle. This tornado is the most northerly report of a tornado on record. Kiana is 545 miles northwest of Anchorage, Alaska.

ON THIS DATE IN 1992: Andrew made a second landfall near Burns Point, LA as a Category 3 hurricane. Morgan City, LA recorded sustained winds of 92 mph with a peak gust of 108 mph. Hammond, LA was deluged with 11.92 inches of rain. As Andrew moved inland and weakened, it spawned 47 tornadoes from this date through the 28th from the South to the Mid-Atlantic States.

No afternoon Weather Briefing video today; I will be in Tuscaloosa live on ABC 33/40 at our “Friday Night Rivals” game of the week at Hillcrest High School… have a great weekend!