SPRING-LIKE DAY: Temperatures are in the 60s over much of Alabama this afternoon with a mix of sun and clouds… a few spots are near 70 degrees. But, just to the northwest, Memphis is barely out of the 30s behind a cold front. The front will stall out just north and west of Alabama tonight; tonight will be mostly fair with a low in the 45-50 degree range early tomorrow. 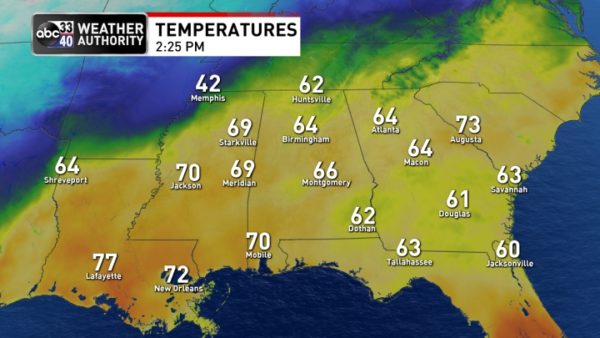 Tomorrow will be much like today… some sun at times with a high in the 65-70 degree range. We can’t rule out a few isolated showers, mainly over the southern half of the state. Clouds will thicken tomorrow night.

THURSDAY/FRIDAY: Rain returns to Alabama Thursday as the front drifts southward. A few embedded thunderstorms are possible as well, but no severe storms are expected with the best shear in the cold air north of the front. Temperatures will be in the 50s over North Alabama, with 60s to the south. Friday will be cloudy and colder with some light rain possible mainly over the southern half of the state. The high Friday will be in the 30s near the Tennessee state line… 40s for North/Central Alabama… and 50s for the southern counties.

THE ALABAMA WEEKEND: Saturday will be another cloudy, cold day with periods of rain. There is a chance the rain could begin Saturday morning as sleet or freezing rain over the Tennessee Valley of far North Alabama, but for now no impact is expected. The high will be in the 40s over the north/central counties of the state, with 50s for South Alabama. Even cold air arrives Sunday… temperatures won’t get out of the 30s over the northern half of the state. For now most of the day Sunday looks dry.

NEXT WEEK: The next wave has potential to bring more precipitation to Alabama late Monday, Monday night, or early Tuesday. Really too early to know if any freezing rain will be involved… it will be a close call for the northern third of the state. Yet another wave will likely bring rain Thursday… See the Weather Xtreme video for maps, graphics, and more details.

NOTE: Another reminder global models don’t really have the grid resolution to handle shallow layers of cold air, and with an active southern branch of the jet understand forecast changes are to be expected in this pattern. Keep an eye on the blog for forecast updates.

ON THIS DATE IN 1994: A devastating ice storm struck Mississippi, Louisiana and extreme northwest Alabama. Freezing rain began falling over North Mississippi during the early morning hours and continued until midday on the 10th. Ice accumulated 3 to 6 inches thick on exposed objects in the affected area. Due to the weight of the ice, power lines, trees and tree limbs were downed. Nearly one million people were without power after the storm, some for a month.