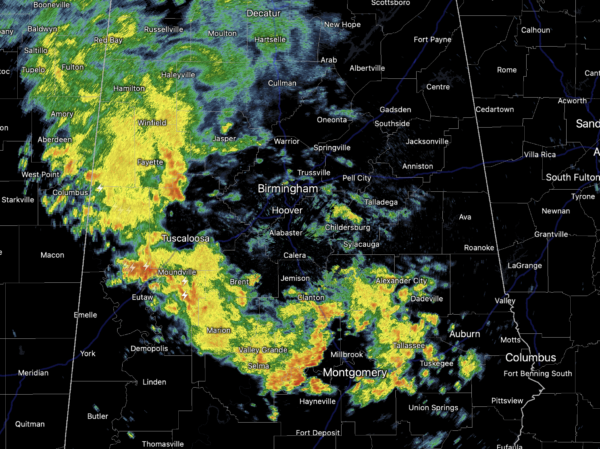 Periods of rain and storms are ahead for Alabama as a boundary remains in place across the state, allowing for impulses of energy to ride along it. Today, rain and storms are tracking northwest to southeast through Alabama. Now through Sunday, showers and storms will be fairly common for much of Alabama due to the moist, unstable air mass in place. It won’t rain all the time and it won’t rain everywhere each day, but certainly it is one of those patterns where you will want to keep the rain gear close to hand as rain chances look to remain 70-80% range through Friday; dropping closer to 50% for the weekend.

The next several days we can’t rule out some stronger storms, with gusty winds the main threat, and the SPC does maintain the “marginal risk” across southern portions of Alabama for this wind threat. 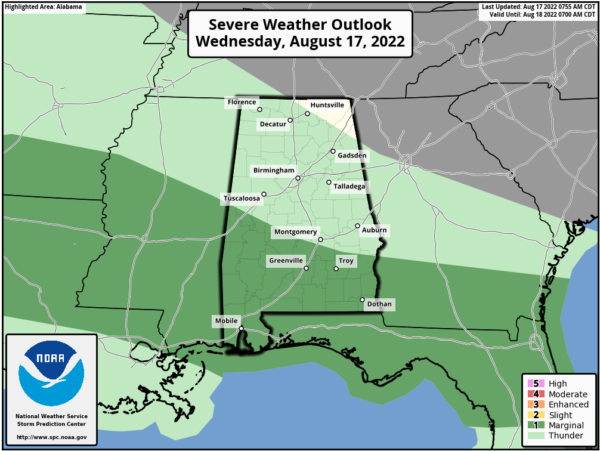 For the rest of us, just remember summer storms produce tremendous amounts of lightning, and of course intense tropical downpours would could lead to areas of isolated flash flooding. Also know that rainfall distribution will remain very uneven with many locations getting soaked, while other see much less. Most of the rain and storm will come during the afternoon and evening hours, but with this set-up, rain and storms can and will occur at times during the morning and overnight hours as well, as we are seeing this morning. Due to the clouds and higher rain chances, temperatures will range from the low to upper 80s across Alabama the next several days.

ACROSS THE USA: Dangerous heat is expected across areas in Texas and from Washington through California. Several daily high temperature records are expected to be either tied or broken in the West. Monsoonal showers and thunderstorms may result in flash flooding and debris flows over the Southwestern U.S. through Friday.

IN THE TROPICS: A tropical wave over Honduras and the northwestern Caribbean Sea is forecast to move across Central America during the next couple of days and emerge over the Bay of Campeche, where an area of low pressure could form on Friday. Some gradual development of this system is possible while it moves northwestward over the southwestern Gulf of Mexico through the weekend. Formation chance through 5 days…low…20 percent. 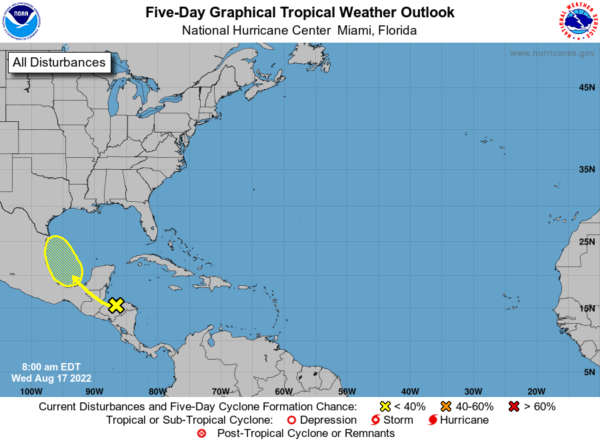 INTO NEXT WEEK: No real change in the the overall pattern…Expect scattered to numerous showers and storms on a daily basis through the week with some sun along the way. Like this week, most of the showers will come during the afternoon and evening hours, but not necessarily all of them. Highs should continue to hold in the 80s.

WORLD TEMPERATURE EXTREMES: Over the last 24 hours, the highest observation outside the U.S. was 123.3F at Ahwaz, Iran. The lowest observation was -98.3F at Concordia, Antarctica.