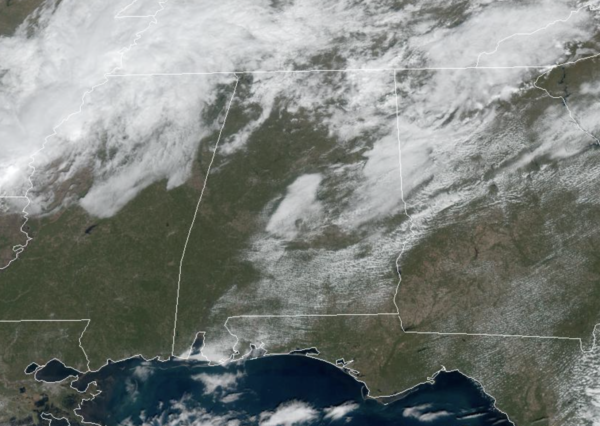 An upper-ridge remains in place over the Deep South today and tomorrow, and that is allowing for well-above average temperatures, more then ten degrees above average, with highs in the low to mid 80s. We are seeing a mix of sun and clouds today and will again tomorrow.

MUCH COLDER WEEKEND: With a tropical system moving north east of the state, the cyclonic flow around the system will pull much colder air south on the backside of the system. This will be the coldest air so far this season as highs drop into the mid 50s Saturday with a very cool north wind, and temperatures will drop into the upper 20s to lower 30s by Sunday morning. Some North Alabama communities might not get out of the 40s Sunday as the cold air continues to settle into the state. The weather will be dry with sunny days and clear nights.

NEXT WEEK: Lows will be in the 20s pretty much statewide early Monday morning. The rest of the week looks mostly dry with temperatures remaining below average…highs in the 50s and lows mostly in the 30s.

WATCHING NICOLE: The center of Subtropical Storm Nicole was located near latitude 26.3 North, longitude 69.6 West. The storm is moving toward the northwest near 9 mph. This motion with a decrease in forward speed is expected later today. A turn westward or west-southwestward is then forecast Tuesday through early Thursday. On the forecast track, the center of Nicole will approach the northwestern Bahamas on Tuesday, move near or over those islands on Wednesday, and approach the east coast of Florida by Wednesday night. 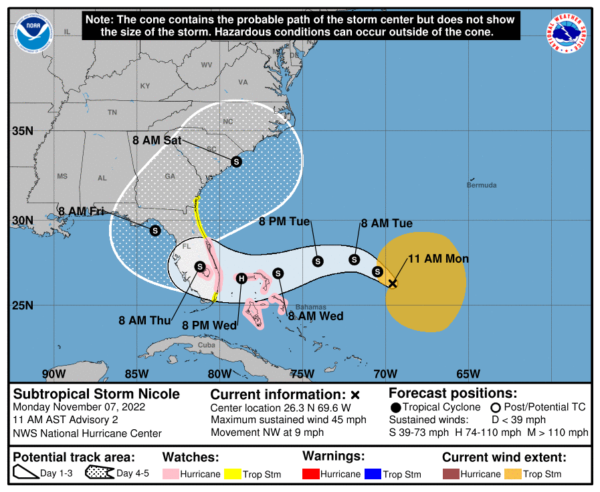 Maximum sustained winds are near 45 mph with higher gusts. Gradual strengthening is forecast during the next few days, and Nicole is forecast to be at hurricane intensity by Wednesday or Wednesday night while it is moving near or over the northwestern Bahamas. Winds of 40 mph extend outward up to 275 miles from the center. The estimated minimum central pressure is 1002 mb (29.59 inches).

Elsewhere, there is one more feature well east of the Bermuda which has a medium chance for development, but will not be a threat to land. If it develops, it would be Owen. 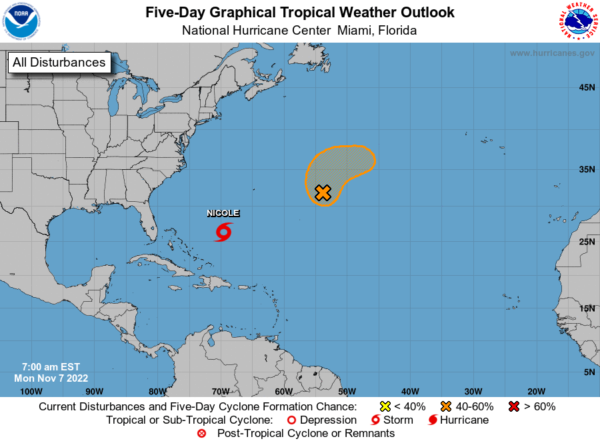 WORLD TEMPERATURE EXTREMES: Over the last 24 hours, the highest observation outside the U.S. was 108.3F at Wyndham Airport, Australia. The lowest observation was -69.7F at Vostok, Antarctica.