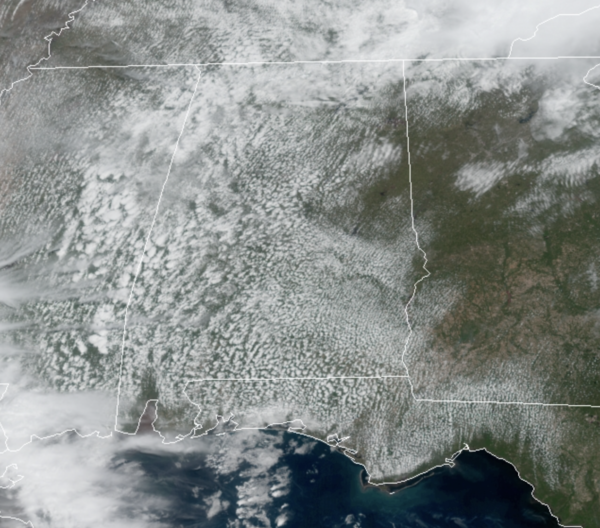 Today is featuring more clouds than sun, with a few isolated showers possible, and temperatures are much warmer, surging into the low and mid 80s across the state. Overall a quiet day of weather for Alabama, while west of the state, severe weather will occur from the Northwest Gulf of Mexico into the Great Lakes today and tonight. In fact, much of Iowa is under a “moderate risk” (level 4/5) of severe storms. 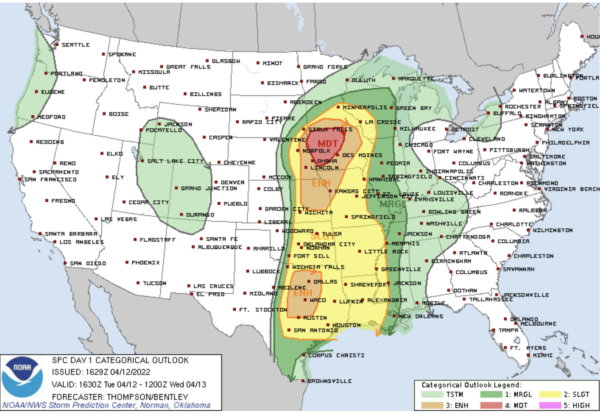 STRONG/SEVER STORMS RETURN: Most of tomorrow will be dry, with only scattered showers, but a cold front will bring an organized band of rain and storms into the state late tomorrow night into the pre-dawn hours Thursday. The SPC maintains an “enhanced risk” (level 3/5) of severe thunderstorms defined for the northwest corner of the state…most of Alabama is in a “slight risk” (level 2/5), and locations in East and South Alabama are in a “marginal risk” (level 1/5) as the storms should be weakening. We note, the SPC upgraded to a “moderate risk” along the Mississippi River. 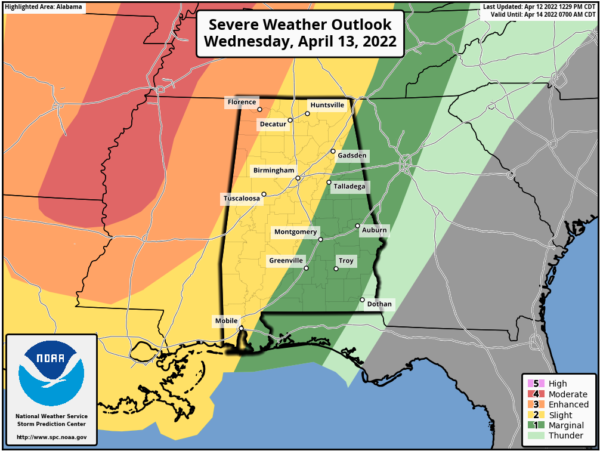 Late tomorrow night, the line should enter the northwest corner of the state late tomorrow night around 10PM, it will reach I-59 (Tuscaloosa/Birmingham/Gadsden) around 3-4AM, and then moving into East and Southeast Alabama after 5AM.

The main threat will come from strong, potentially damaging straight line winds. With the main dynamics well to the north, shear values won’t be especially high, so the tornado threat for now looks low. But, as always in a case like this, you can’t rule out an isolated tornado in the line. With this being a “middle of the night” event, but sure you have you NOAA Weather Radio on, and don’t use the “do not disturb” feature on your phone so you can get notifications.
Thankfully, the line should be weakening as it moves through the state.

The sky becomes partly mostly sunny during the day Thursday as dry air returns…and Friday looks dry with a mix of sun and clouds. The high both days will be in the mid 70s, right at seasonal averages.

EASTER WEEKEND WEATHER: The front will move back north as a warm front, bringing rain back into Alabama both days this weekend. Showers will begin as early as Friday night, and periods of rain are likely Saturday, Saturday night, and Sunday as the front stalls out over the region. Some thunder is possible, but for now severe storms are not expected. Highs will remain in the mid 70s.

NEXT WEEK: Periods of rain are likely Monday, then drier air will likely move in during the mid-week period. Highs during the week will be mostly in the low 80s. Global models show another round of rain and possible thunderstorms Thursday

WORLD TEMPERATURE EXTREMES: Over the last 24 hours, the highest observation outside the U.S. was 113.9F at Ganganagar, India. The lowest observation was -92.6F at Concordia, Antarctica.