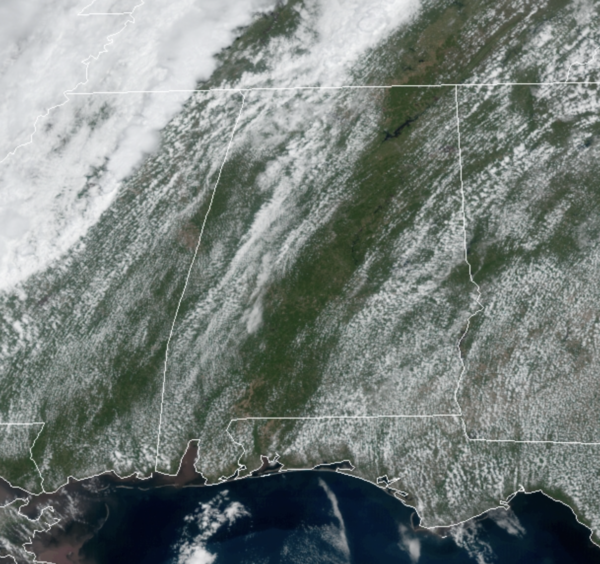 We are seeing a mix of sun and clouds today, but an approaching front will bring the chance for showers and possibly a thunderstorm this afternoon and tonight to the state. The SPC maintains a very low end “marginal risk” (level 1/5) of severe thunderstorms for West and North Alabama (north of a line from Tuscaloosa to Cullman to Huntsville) late this afternoon and early tonight, but there is no risk of a tornado, and no risk of hail. A storm or two could produce gusty winds, but we aren’t expecting any meaningful severe weather issues. 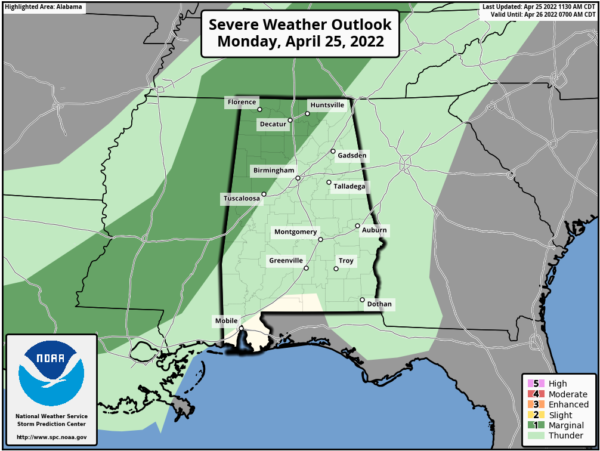 For the rest of us, it is warm with highs well into the 80s again and we will watch the radar for showers, and any rain that falls will be light, with rainfall amounts well under 1/2 inch. Showers will end early tomorrow, followed by gradual clearing. The day will be noticeably cooler with a high closer to 70° and a breezy north wind of 15-20 mph.

REST OF THE WEEK: The weather will be dry for the latter half of the week with mostly sunny days, fair nights, and a warming trend. The high Wednesday will be in the mid 70s, then close to 80° Thursday, followed by low to mid 80s Friday. We do have a couple of chilly nights Tuesday and Wednesday with lows in the 40s.

THE ALABAMA WEEKEND: Moisture levels will rise a bit over the weekend, and we will mention some risk of spotty showers late Saturday and Sunday. For now we aren’t expecting the rain to be widespread or heavy. Both days will feature a mix of sun and clouds with a high between in the low to mid 80s.

NEXT WEEK: Highest chance of rain should come around the middle of next week when a cold front will push through the state; highs will remain mostly in the low to mid 80s.

MORNING SKY SHOW: This is a great week to wake up early and look at the planets. Venus and Jupiter are converging for a spectacular conjunction at dawn. By Friday morning they’ll be so close together, some observers may think the two have merged.

WORLD TEMPERATURE EXTREMES: Over the last 24 hours, the highest observation outside the U.S. was 114.8F at Matam, Senegal The lowest observation was -97.2F at Concordia, Antarctica.