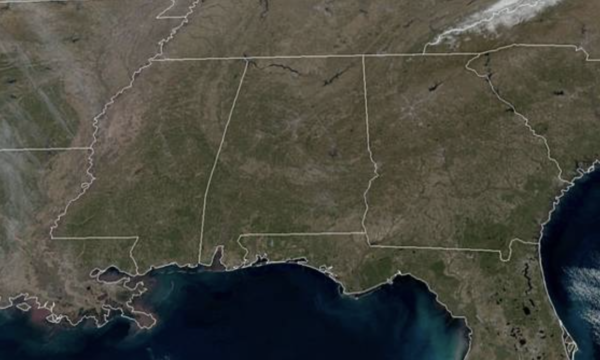 We are again seeing a sky full of sunshine across the state of Alabama today, and after the freezing start to they, temperatures are heading towards the low 50s for many communities later this afternoon. At the midday hour, many locations remain in the 40s.

Thankfully, the winds are not an issue like they have been the past few days. Tonight, will feature a few passing clouds, expect another freeze with lows in the upper 20s and lower 30s.

RAIN ON THE WAY: Tomorrow will be dry but an approaching cold front will cause clouds to increase through the day and highs surge into the low 60s. The front will bring rain to the state late tomorrow night into Friday morning, with rain amounts less than 1/2 inch expected, no severe storms, and likely no thunder. The rain ends early in the day Friday as the front pushes down to the Gulf Coast. Friday should feature a clearing sky and cooler temps with highs in the lower 50s.

WORLD TEMPERATURE EXTREMES: Over the last 24 hours, the highest observation outside the U.S. was 106.0F at The Vioolsdrif, South Africa. The lowest observation was -62.9F at Verhojansk, Russia.

WEATHER ON THIS DATE IN 1956: Arctic air continued to invade the central U.S. The temperature at Midland TX plunged from a record high of 80 degrees to 37 degrees in just three hours. Morning lows in the higher elevations of Wyoming were as cold as 38 degrees below zero. Heavy snow blanketed southwestern Colorado, with 16 inches reported at Steamboat Springs.