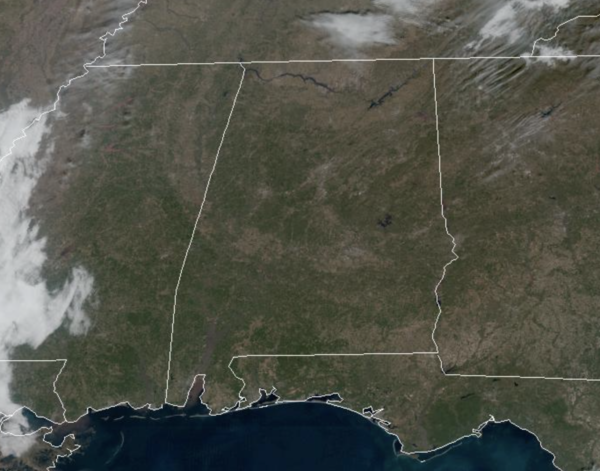 We are seeing mainly sunny conditions today and the weather will remain dry today and tomorrow with highs in the 60s both days. A few showers are possible across along the coast tomorrow as a strong southerly flow develops ahead of the approaching cold front. In fact, locations across South Alabama will be in the 70s the next couple of days.

STORM THREAT THURSDAY: A cold front will bring a band of rain and thunderstorms into Alabama on Thursday. The SPC has defined a “slight risk” (level 2/5) of severe storms for most of Alabama on Thursday. Storms will enter Northwest Alabama Thursday morning, and will progress through the state during the day. The storm mode is expected to be linear, meaning the main threat will come from damaging winds. A brief tornado can’t be totally ruled out, but isn’t especially likely. The highest chance of a brief tornado will come Thursday afternoon in areas east and south of Montgomery. Rain amounts of 1/2 to 1 inch are expected.

COLDER WEEKEND: The weather turns sharply colder Friday behind the front with a mix of sun and clouds and a brisk north wind. A few snow flurries are possible during the morning hours over far North Alabama, but no impact or accumulation is expected. Temperatures won’t get out of the 40s across North Alabama. The weekend will feature sunny cool days and clear cold nights…temperatures will be below freezing over the northern half of the state both Saturday and Sunday morning. Highs will struggle to climb out of the 40s again on Saturday, but 50s will be common on Sunday.

ANOTHER X-CLASS SOLAR FLARE: Earth-orbiting satellites detected another X-class solar flare today–the second in less than a week and a possible harbinger of more to come. There are now two large, unstable sunspots capable of producing these strong explosions, and both are turning toward Earth.

NEXT WEEK: Another wave will bring a chance of showers and storms to the state Monday night and Tuesday, followed by another chance of wet weather by Thursday or Friday. Highs will be mostly in the 60s through the week.

WORLD TEMPERATURE EXTREMES: Over the last 24 hours, the highest observation outside the U.S. was 113.7F at Augrabies Falls, South Africa. The lowest observation was -79.8F at Dzalinda, Russia.