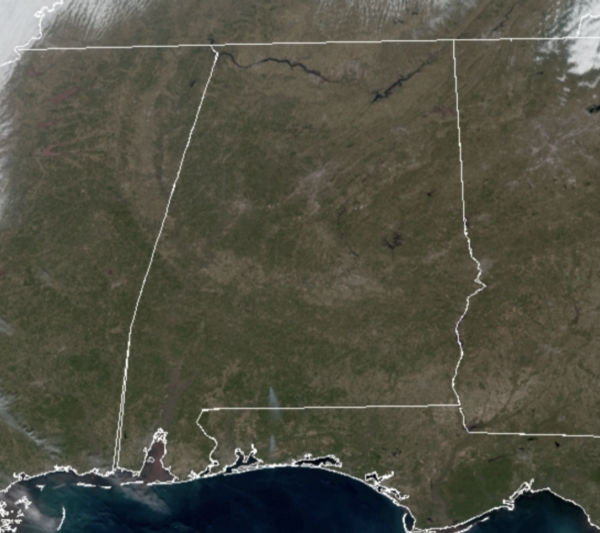 The clouds are gone from yesterday and we are seeing a mainly sunny sky across Alabama today. Despite the sun, it remains a chilly day with temperatures at midday in the upper 30s and lower 40s. 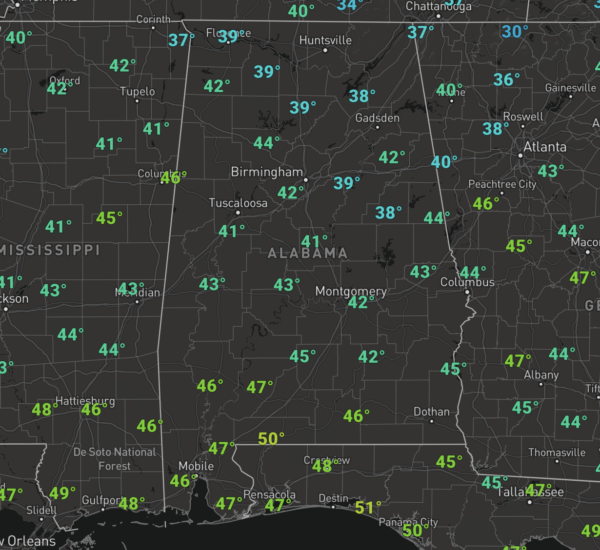 By the end of the day, we should see mid to upper 40s across much of North/Central Alabama. Also, winds remain brisk this afternoon as well making it feel colder. Tonight, the sky will be clear and lows tonight will be dropping into the mid and upper 20s areawide.

WARMER WEDNESDAY: After the freezing start to the day, we will again see a day full of sunshine and it will be a bit warmer. Highs tomorrow will be in the low and mid 50s, which is actually still a few degrees below the average of 56° for Birmingham for this time of year.

RAIN RETURNS: Thursday will be dry but an approaching cold front will cause clouds to increase through the day and highs surge to near 60°. That front will bring rain to the state late Thursday night into Friday morning, with rain amounts less than 1/2 inch expected, no severe storms, and likely no thunder. The rain ends early in the day Friday as the front pushes down to the Gulf Coast. Friday should feature a clearing sky with chilly temps as high will range from the upper 40s to lower 50s.

SATURDAY WEATHER: Saturday will be dry for the northern half of the state with a mix of sun and clouds and highs in the low 50s. However, a wave of low pressure will develop and track along the front to the south, which will produce clouds and showers for areas of South Alabama and the Gulf Coast. This moisture will spread north late Saturday night and some areas of rain are likely statewide after midnight Saturday and into early Sunday morning, but for the most part, any rain will be light.

WORLD TEMPERATURE EXTREMES: Over the last 24 hours, the highest observation outside the U.S. was 106.5F at The Monument Airport, Australia. The lowest observation was -67.0F at Verhojansk, Russia.

WEATHER ON THIS DATE IN 1956: A record snowstorm in New Mexico and west Texas began on Ground Hog’s Day. The storm produced 15 inches of snow at Roswell NM, and up to 33 inches in the Texas Panhandle.