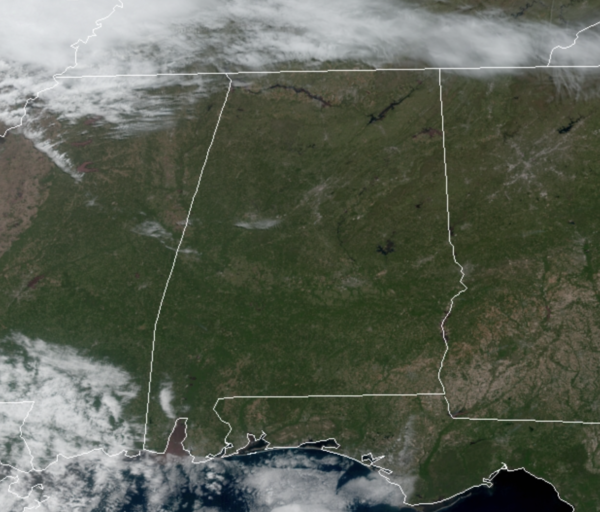 Beautiful weather today across all of Alabama; we are seeing tons of sunshine today and temperatures are warm with upper 70s and lower 80s across Central Alabama as we roll through the afternoon hours. A front dropping south out of the Ohio Valley will bring rain and storms a back to Alabama tonight and through the weekend as the front stalls across the state.

RAIN/STORMS RETURN TONIGHT: Clouds will increase tonight, and showers and storms will likely move into the northwest counties of the state after midnight ahead of the southward moving cold front. 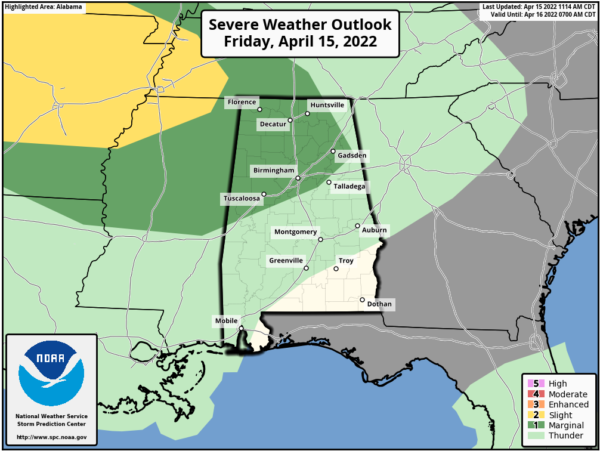 The SPC has a low end “marginal risk” (level 1/5) of severe thunderstorms defined for the northern third of Alabama after midnight tonight; along and north of a line from Eutaw to Alabaster to Jacksonville, including Birmingham, Tuscaloosa, and Gadsden…stronger storms could produce some small hail and gusty winds, during the pre-dawn hours Saturday. Lows tonight will be closer to 60°

SATURDAY MORNING STORMS: Rain and storms will be ongoing in the morning, as the overnight storms continue to drop south through the state in the morning. The SPC maintains a “marginal risk” (level 1/5) over about the southern 2/3 of the state tomorrow (south of a line from Vernon to Birmingham to Ranburne); as stronger storms could produce hail and gusty winds. The tornado risk is near zero tomorrow.

For the rest of our Saturday, we will see more clouds than sun, with some scattered showers and storms. It will be mild with temperatures in the mid 70s.

MORE STORMS SUNDAY: For now, it looks like a lot of Alabama could start the day off dry, which would be good news for those sunrise services, but still rain and storms will be possible at just about anytime Sunday as the front remains stalled across the state. Also, the SPC has a “slight risk” (level 2/5) defined for Southwest Alabama, and a “marginal risk” (level 1/5) south of a line from Tuscaloosa to Clanton to Auburn.

Sunday afternoon and evening, another complex of storms should roll into the Alabama and we expect the same situation; stronger storms will be capable of producing gusty winds and hail. Rain amounts over the weekend will be in the 1-2 inch range for most communities this weekend.

FOOTBALL WEATHER: For the Alabama “A Day” game in Tuscaloosa tomorrow (2:00p CT kickoff)… the sky will be mostly cloudy with a few passing showers during the game, and possibly a thunderstorm. Temperatures will be in the low to mid 70s.

The Birmingham Stallions will most the New Jersey Generals tomorrow evening at Protective Stadium (6:30p CT kickoff)… expect a mostly cloudy sky with a few showers; temperatures will fall from near 72 at kickoff, into the upper 60s by the final whistle.

NEXT WEEK: Some showers are likely Monday morning, but the sky clears by the afternoon as drier air returns to the state. For now, the rest of the week, Tuesday-Friday, will feature mainly sunny days, and temperatures in the 70s, with warmer temperatures likely by the end of the week.

WORLD TEMPERATURE EXTREMES: Over the last 24 hours, the highest observation outside the U.S. was 113.7F at Jacobabad, Pakistan. The lowest observation was -106.2F at Vostok, Antarctica.