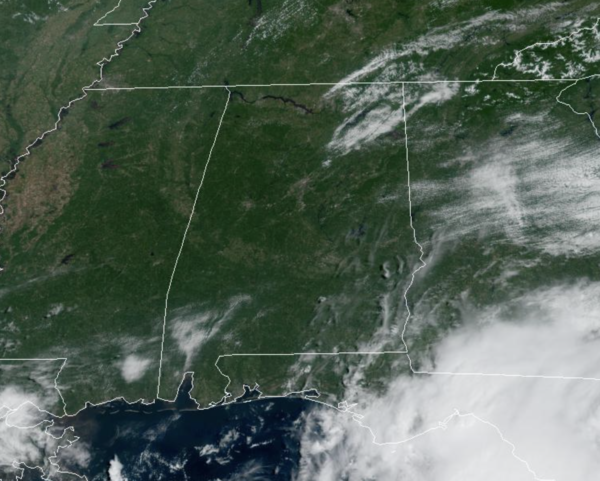 Today is a relatively dry day for the northern half of the state, and we are seeing more sun than clouds. Temperatures this afternoon are in the mid to upper 80s. The better chance for rain today is across the southern and southeastern continues of the state. Tonight, moisture begins to surge north and it will become mainly cloudy.

WET END TO WEEK: An upper trough and surface low to the south will send deep tropical moisture north into Alabama, almost assuring us a very wet Friday across the state. Showers and storms become more numerous and widespread, and the unsettled weather will continue into Saturday and Sunday. The rain will be heavy at times, and some flooding issues could develop with the saturated soil conditions. It is not going to rain all the time, but occasional showers and storms are likely. Highs will be in the upper 70s tomorrow with rain chances closer to 90%. They’ll be in the 60-70% range Saturday and Sunday. Average rainfall totals for much of the state will be in the once inch range, with isolated higher amounts possible.

TROPICS: Danielle has become Post-Tropical with winds of 65 mph, is in the moving east towards Europe. Hurricane Earl, with winds of 105 mph, is close to Bermuda, and continues northward. Both of these systems will stay well east of the U.S. 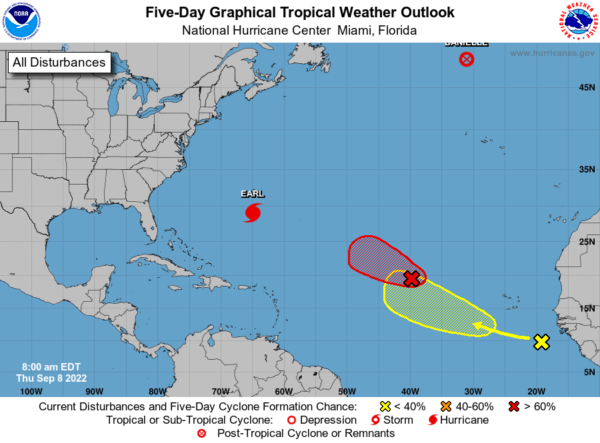 Elsewhere, an area of low pressure located almost a thousand miles west-northwest of the Cabo Verde Islands is producing a concentrated area of disorganized showers and thunderstorms primarily east of its center. Environmental conditions appear only marginally conducive for additional development of this system, but only a small increase in organization could result in the formation of a short-lived tropical depression or storm later today while it moves westward to west-northwestward at 15 to 20 mph over the central tropical Atlantic. After that time, upper-level winds are forecast to become less conducive for development. Formation chance through 48 hours…high…70 percent.

Plus, a tropical wave has recently emerged off the west coast of Africa this morning and is producing an area of disorganized showers and thunderstorms. Environmental conditions appear conducive for some gradual development as the system moves generally west-northwestward over the eastern tropical Atlantic. Formation chance through 5 days…low…30 percent.

If these features develop, they would be Fiona and Gaston, and are expected to recurve out into the Atlantic.

NEXT WEEK: Monday will remains wet, by Tuesday a strong front swings through the state, delivering a much drier, continental air mass into the state. This will clear out the humidity and rain chances, allowing for lots of sunshine, and highs in the 80s. Lows are likely to fall into the 50s for many locations. This will bring a a true hint of fall to Alabama next week.

WORLD TEMPERATURE EXTREMES: Over the last 24 hours, the highest observation outside the U.S. was 113.4F at Adrar, Algeria. The lowest observation was -103.4F at Vostok, Antarctica.