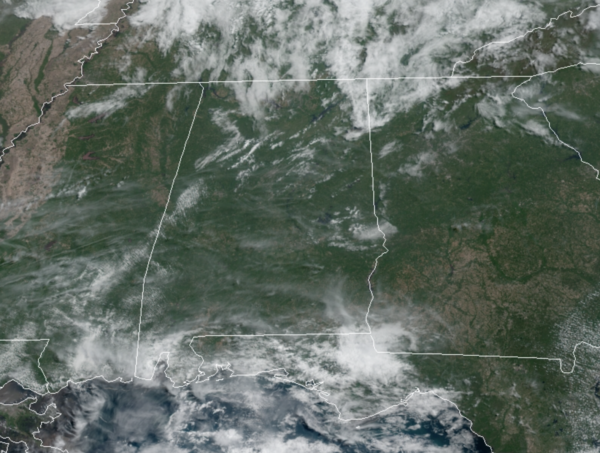 Today is featuring a mix of sun and clouds with highs in the low to mid 80s across Alabama this afternoon. There were a few showers over North Alabama this morning, and this afternoon there could be a few isolated showers over the southern half of the state. Most of Alabama will remain rain-free today. Tonight will be another mild one with upper 50s and lower 60s.

ACROSS THE USA: Extremely critical fire weather conditions are expected to develop in southeastern Colorado Friday with critical conditions existing from the Southwest into the southern High Plains. Severe thunderstorms capable of all hazards and heavy rain are possible Friday across portions of the southern and central Plains. Heavy rain will increase river flooding in the Northern Plains.

WEEKEND WEATHER: Increasing moisture levels this weekend means both Saturday and Sunday will feature more clouds than sun, and highs in the low to mid 80s. Tomorrow, we will mention some scattered showers and storms during the afternoon and evening hours, but most places will be dry. Sunday will feature more numerous showers and storms, especially for the northern half of the state, as a weakening front drops into the state from the north. No threat of severe weather and rainfall amounts around 1/2 inch are possible.

HELLO MAY: Monday through Thursday, expect warm and humid days with highs in the 80s and lows in the 60s. Higher humidity means scattered showers and storms will be possible on a daily basis, but again, nothing too heavy or widespread. Late in the week, it looks like another front could bring more numerous areas of rain and storms.

WORLD TEMPERATURE EXTREMES: Over the last 24 hours, the highest observation outside the U.S. was 118.4F at Gaya, Niger. The lowest observation was -102.6F at Vostok, Antarctica.