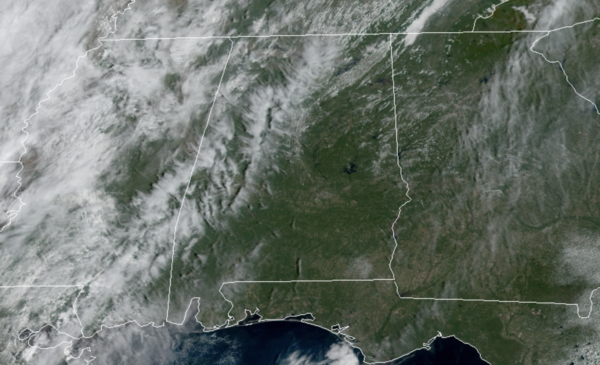 The weather remains mainly sunny and dry today and tomorrow with highs in the mid 80s. Tomorrow, a cold front will cause clouds to increase late in the day with scattered showers late Friday night and early Saturday. Limited moisture levels means rain amounts should be less than one-quarter inch, but many locations are likely to stay dry.

FRIDAY NIGHT LIGHTS: For the high school games tomorrow night, the sky will be mostly cloudy with a shower possible at some stadiums, mainly across Northwest Alabama; temperatures will be in the 70s.

FALL TEMPERATURES AT LAST: The much anticipated front passes through the state late Friday night and early Saturday with clouds and a thin band of showers and storms. The rain will end very early in the day, likely before sunrise for much of Central Alabama. You will notice once the front passes your location as a refreshing north breeze of 10-20 mph will deliver the drier and cooler air with a clearing sky and temperatures mainly in the upper 60s. Saturday night will be a clear and chilly one with a diminishing wind, we project a lows early Sunday morning in the low and mid 40s. Sunday will be a fantastic fall day with abundant sunshine with a highs near 70°. Sunday night will be another chilly one with widespread 40s, and both Sunday and Monday mornings, I would not be surprised to see some 30s in those colder spots. This will be coldest air so far this season for most communities.

NEXT WEEK: The week starts off cool and dry with highs in the 70s and lows in the 50s as the fall air and quiet weather pattern will persist. By the end of the week, the models are still suggesting some showers return to the area with a feature lifting out of the Gulf. This would be a quick hitting system with another cooler and drier air mass arriving by the following weekend. 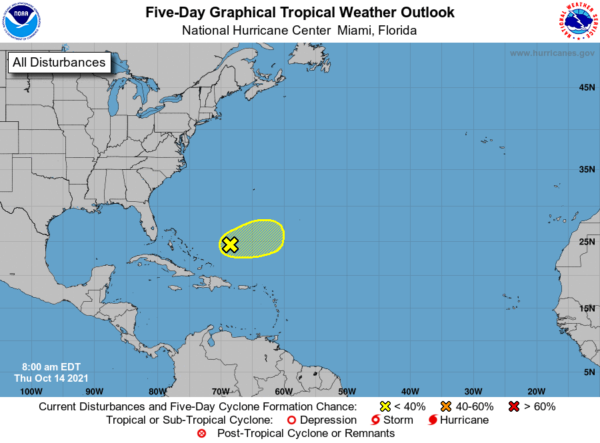 IN THE TROPICS: For the North Atlantic…Caribbean Sea and the Gulf of Mexico: A broad area of low pressure located a few hundred miles northeast of the Turks and Caicos continues to produce a large area of disorganized cloudiness and thunderstorms primarily east and northeast of its center. Strong upper-level winds are expected to prevent significant development of this system during the next day or so. The low is beginning to move eastward and should accelerate further to the east-northeast over the next several days. On Friday, the disturbance is forecast to interact with a mid-latitude trough and further tropical development is not anticipated after that time. Formation chance through 5 days…low…10 percent.

WORLD TEMPERATURE EXTREMES: Over the last 24 hours, the highest observation outside the U.S. was 111.2F at Arafat, Saudi Arabia. The lowest observation was -76.5F at Dome A, Antarctica.

WEATHER ON THIS DATE IN 1984: Dense fog contributed to an 118 vehicle accident on I-94, just south of Milwaukee WI. It was the seventh day of an eight day stretch of dense fog. At the time of the accident the visibility was reportedly close to zero.