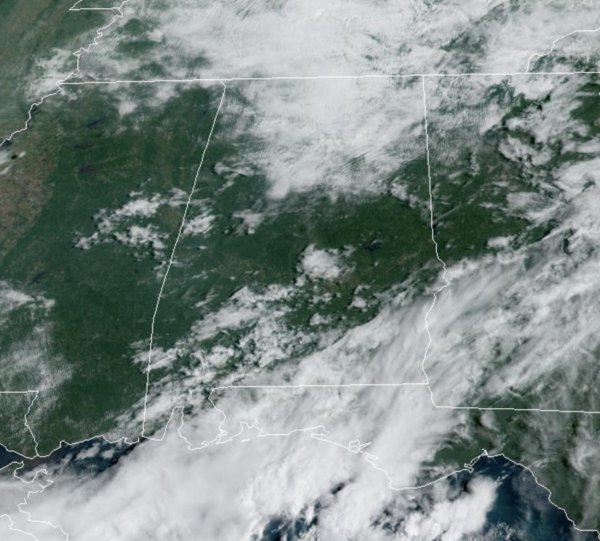 Today is a humid day with highs in the mid to upper 80s. It is partly sunny and we are watching the radar for scattered showers and storms this afternoon and evening. Rain chances today are around 40% range. Tomorrow, some dry air slips into North Alabama, and rain chances across the northern half of the state are much lower, less than 20%. It will be a day with more sun than clouds and highs again in the mid to upper 80s.

WET END TO WEEK: An upper trough will be over the Southeast, and with a deep fetch of tropical moisture returning to the state, showers and storms become more numerous and widespread Friday, continuing at times Saturday and Sunday. The rain could be heavy at times, and some flooding issues can’t be ruled out with the saturated soil conditions. Not a weekend washout, and you will see some sun at times, but occasional showers are likely. Highs will be in the upper 70s to lower 80s due to clouds and rain. Rain chances Friday are close to 80% for Friday, while they’ll be in the 60-70% range Saturday and Sunday.

FOOTBALL WEATHER: For the high school games across Alabama Friday night, periods of rain are likely with temperatures in the 70s.

Saturday, Alabama will take on Texas in Austin (11a CT kickoff)… the sky will be sunny with temperatures rising from near 90° at kickoff, into the mid 90s during the second half.

TROPICS: Hurricane Danielle, with winds of 80 mph, is in the North Atlantic between the U.S. and Europe, it is moving eastward over the next few days. Hurricane Earl, with winds of 85 mph, is well north of Puerto Rico, and will move slowly northward. Both of these systems will stay well east of the U.S. 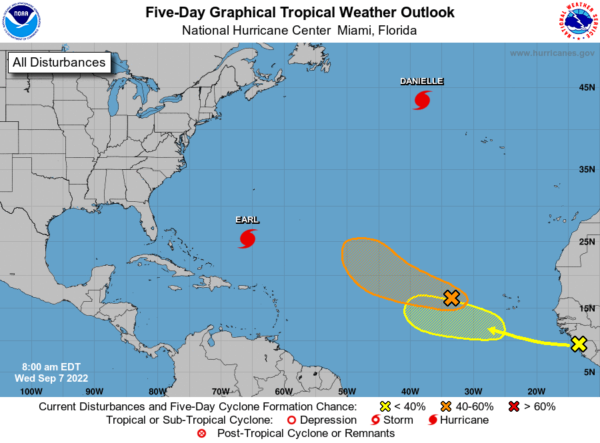 Elsewhere, an area of low pressure located several hundred miles west of the Cabo Verde Islands is producing a large area of disorganized showers and thunderstorms. Environmental conditions appear conducive for additional development of this system over the next couple of days, and a tropical depression could form over this period while it moves westward to west-northwestward at 15 to 20 mph over the eastern and central tropical Atlantic. After that time, upper-level winds are forecast to become less conducive for development. Formation chance through 48 hours…medium…60 percent.

A tropical wave currently located near the west African coast is forecast to emerge offshore into the eastern Atlantic over the next day or so. Environmental conditions appear conducive for some gradual development thereafter as the system moves west-northwestward over the eastern tropical Atlantic. Formation chance through 5 days…low…30 percent.

If these features develop, they would be Fiona and Gaston, but are expected to recurve out into the Atlantic.

NEXT WEEK: Monday will remains wet, but by Tuesday a strong front swings through the state, delivering a much drier, continental air mass into the state. This will clear out the humidity and rain chances, allowing for lots of sunshine, and highs in the 80s. Lows are likely to fall into the 50s for many locations.

WORLD TEMPERATURE EXTREMES: Over the last 24 hours, the highest observation outside the U.S. was 114.4F at Hassi-Messaoud, Algeria. The lowest observation was -101.4F at Dome A, Antarctica.