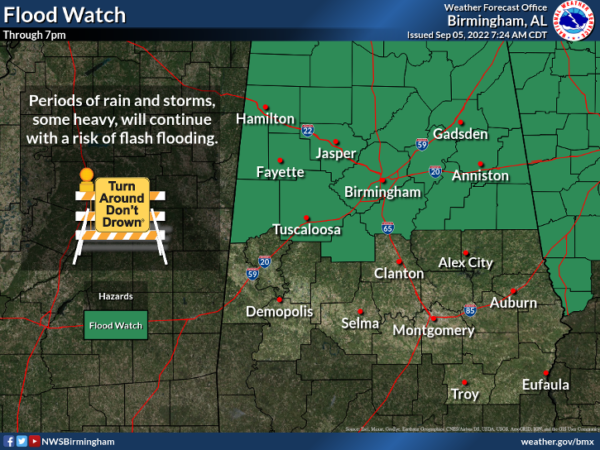 The unsettled, wet pattern persists today across Alabama, and a flood watch remains in effect through the evening for the northern half of Alabama. The ground is saturated over much of North Alabama, and we continue to see periods of rain and a few thunderstorms again today, and these could lead to some flooding issues. 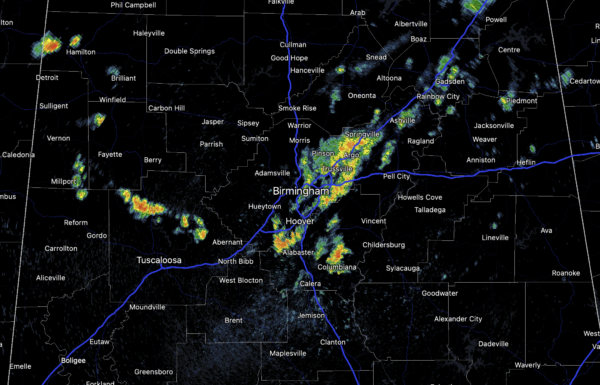 The sky is mainly cloudy with temperatures well-below average for this time of year; most locations are in the upper 70s and lower 80s. 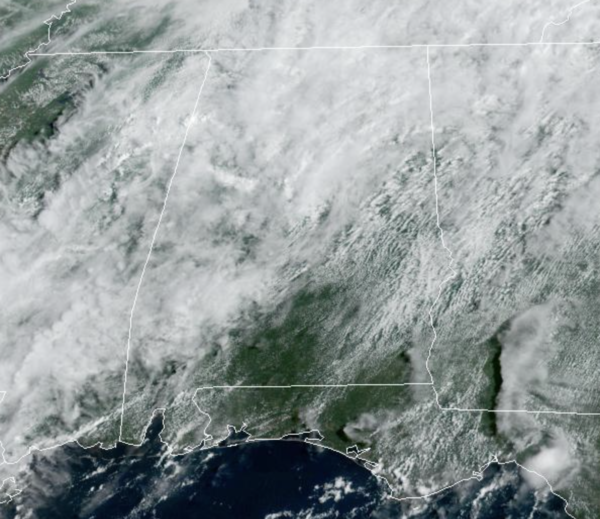 REST OF THE WEEK: Showers and storms remain possible tomorrow and Wednesday, but they should be a little fewer in number and more scattered in nature as some drier air works into the mid-levels. These today days should features a mix of sun and clouds and highs in the mid 80s. By Thursday and Friday, rain and storms become more widespread again as moisture levels increase across the state. Highs will be closer to 80° these days, and with already saturated grounds, we could have to deal with more flooding issues by the end of the week as the wet pattern continues.

THE ALABAMA WEEKEND: The sky will be mostly cloudy Saturday and Sunday with occasional showers and a few thunderstorms both days. Again, this won’t be an “all day” kind of rain, but if you have an outdoor event planned you will have to dodge rain from time to time. Highs over the weekend will be in the low 80s. 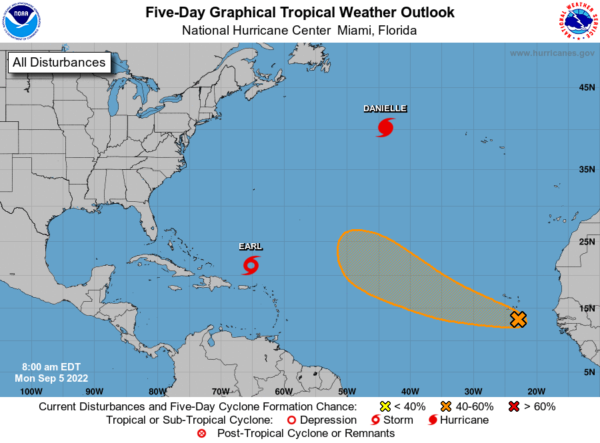 TROPICS: Hurricane Danielle, with winds of 90 mph, is in the North Atlantic between the U.S. and Europe. It will move eastward over the next few days, and will become post-tropical later in the week. Tropical Storm Earl, with winds of 50 mph, is well north of Puerto Rico, and will move slowly northward through mid-week. It is expected to become a hurricane with some models taking it to major hurricane (Cat 3) intensity. Both of these systems will stay well east of the U.S. Finally, a tropical wave located southeast of the Cabo Verde Islands continues to produce a broad area of disorganized shower and thunderstorm activity. An area of low pressure is forecast to form with this system in the next next day or so, and environmental conditions appear marginally favorable for additional development. A tropical depression could form by the latter part of this week as this system moves generally west-northwestward or northwestward over the eastern and central tropical Atlantic. Formation chance through 5 days…medium…40 percent. If this system develops, it would be Fiona, and it is expected to recurve out into the Atlantic.

NEXT WEEK: The long range models are showing a potent front possibly swinging through the state, delivering a drier, continental air mass into the state. If this occurs, much of next week, should feature more sunshine, little if any rainfall, and highs in the 80s.

WORLD TEMPERATURE EXTREMES: Over the last 24 hours, the highest observation outside the U.S. was 122.0F at Khanaqin, Iraq. The lowest observation was -94.2F at Amundsen-Scott South Pole Station, Antarctica.