It is a gorgeous Monday of weather across Alabama as a very dry air mass is in place. You will be hard pressed to find a cloud in the Alabama this afternoon from the Tennessee Valley to the Gulf Coast, the exception being a few clouds in the northeast corner of the state. 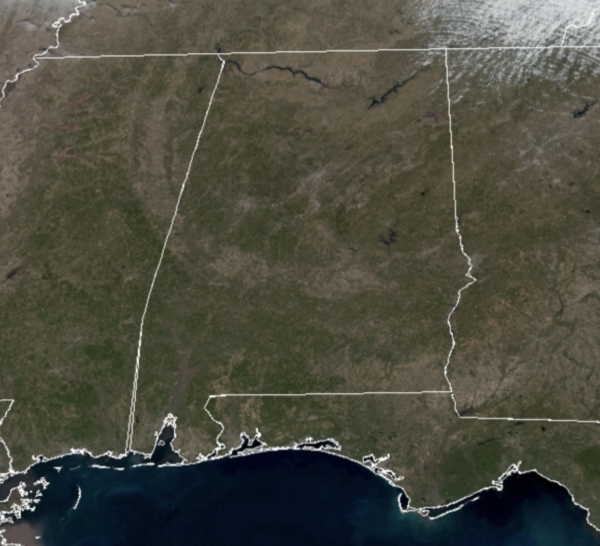 Temperatures are not bad at all either with most locations in the upper 40s and lower 50s at midday, and these will be heading into the mid 50s later this afternoon. 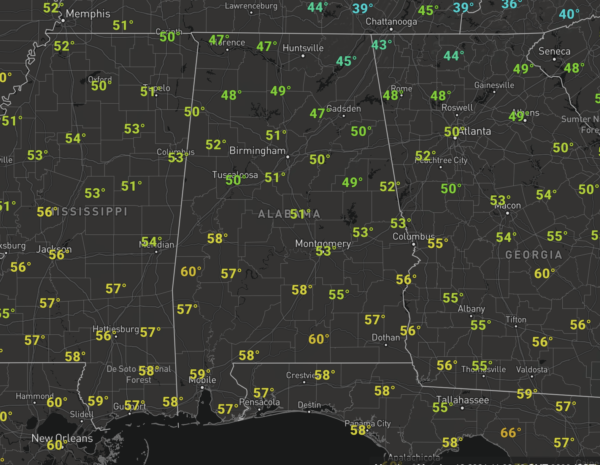 Tonight starts off clear, which will allow temperatures to fall into the 30s, but clouds start to increase by tomorrow morning across Northwest Alabama.

FOR TOMORROW: A cold front will approach the state tomorrow and clouds will be increasing through the day across the state tomorrow. There could be a few light showers along the front, but limited moisture means rain amounts will be light and spotty. The high tomorrow will be in the mid 50s. The front settles down into South Alabama tomorrow night, and stalls across South Alabama the rest of the week.

REST OF THE WEEK: Wednesday will be a dry day with a mix of sun and clouds; afternoon temperatures return to the 50s. The weather turns wet by Thursday and Friday as waves of energy will track along the stalled front, bringing periods of rain back to the state as deep moisture moves north from the Gulf of Mexico. No risk of severe storms, and probably no thunder as the air will be rather stable with temperatures in the 50s. Rainfall totals Thursday and Friday will be in the 1-2 inch range for much of the state, so definitely a nice soaking, but not enough for flooding concerns.

WORLD TEMPERATURE EXTREMES: Over the last 24 hours, the highest observation outside the U.S. was 110.8F at Roebourne Airport, Australia. The lowest observation was -72.6F at Delyankir, Russia.

WEATHER ON THIS DATE IN 1857: A great cold storm swept across the Atlantic Seaboard. Snowfall totals of 12 inches were common, whole gales caused shipwrecks and damage property on islands, and temperatures near zero prevailed from Virginia northward. Great drifts of snow blocked transportation. Richmond VA was cut off from Washington DC for a week.