RADAR CHECK: Showers and storms remain in the forecast today through Sunday. It won’t rain all the time and it won’t rain everywhere each day, but occasional showers and storms will certainly remain a threat across Alabama at times for the weekend. Rain chances are in the 60-70% range, and with these higher rain chances and clouds temperatures are below average with low to mid 80s in the forecast.

As we see each day, any summer storm produce lots of lightning and tropical downpours would could lead to areas of isolated flash flooding. Of course, rainfall distribution has been and will remain very uneven from location to location in this weather setup. Also, rain and storms are possible at anytime, but the more widespread and intense activity will occur during the afternoon and evening hours.

A look at the radar late this morning, scattered areas of rain are ongoing, with a few storms, and these will persist and likely increase in coverage and number the rest of today…just keep an eye on radar trends. 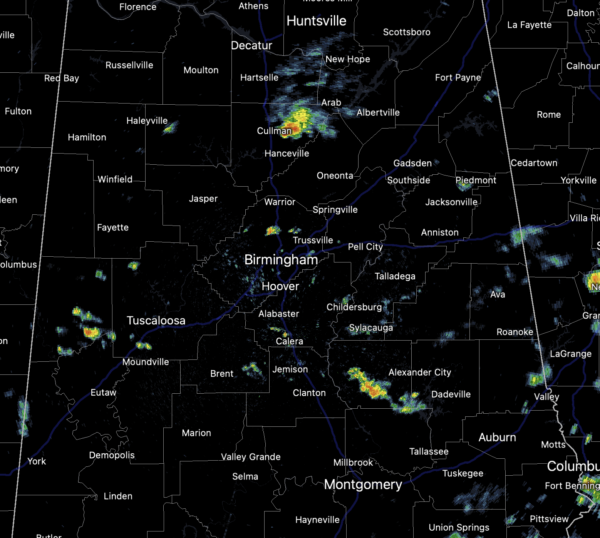 FOOTBALL WEATHER: For the high school games tonight, a few random showers and storms will be around in scattered spots, mainly during the first half of the games. Otherwise, the sky will be mostly cloudy with temperatures falling from near 80 at kickoff, into the upper 70s during the second half.

IN THE TROPICS: Satellite imagery indicates that showers and thunderstorms associated with the broad low pressure area over the southwestern Gulf of Mexico and the Bay of Campeche are getting better organized. Environmental conditions appear favorable for additional development, and a tropical depression could form later today or on Saturday while the system moves northwestward across the southwestern and western Gulf of Mexico. However, by Saturday night, the system is expected to move inland over northeastern Mexico, which will end its chances of development. An Air Force Reserve Hurricane Hunter aircraft is scheduled to investigate the system this afternoon. Interests along the northeastern coast of Mexico and the lower Texas coast should monitor the progress of this system. Regardless of development, this system could bring locally heavy rains to portions of northeastern Mexico and southern Texas over the weekend. Formation chance through 48 hours…medium…60 percent.

INTO NEXT WEEK: No real change in the the overall pattern…Expect scattered to numerous showers and storms on a daily basis through the week with some sun along the way. Like this week, most of the showers will come during the afternoon and evening hours, but not necessarily all of them. Highs should continue to hold in the 80s.

WORLD TEMPERATURE EXTREMES: Over the last 24 hours, the highest observation outside the U.S. was 123.1F at Jarha, Kuwait. The lowest observation was -94.5F at Dome A, Antarctica.