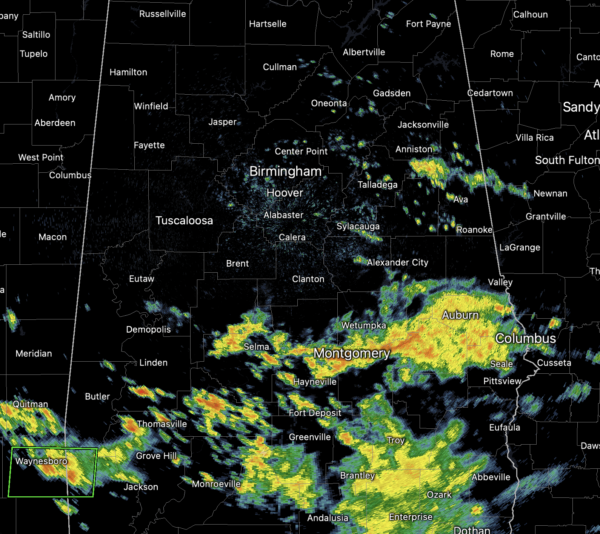 Clouds and rain continue today across much of Alabama, and some localized areas of flooding are concern, especially for areas of to the south. A Flood Watch remains in effect for much of West and Southwest Alabama today, due to the flooding threat. Rain is possible at anytime and anywhere so continue to keep the rain gear handy. With the clouds and rain, temperatures continue to be well-below average for late August in Alabama with most locations in the upper 70s. Rain chances will decrease a bit tomorrow, but still in the 60-70% range, highs tomorrow will be in the low 80s. Rainfall amounts the next two days will vary greatly across the state, with the heavier amounts across South Alabama, where an additional 2-4” are possible; in North/Central Alabama totals looks closer to an inch.

FRIDAY NIGHT LIGHTS: For the high school games Friday night, a few scattered showers are possible, mostly during the first half of the games. Temperatures will be near 83 at kickoff, falling into the upper 70s during the second half.

WEEKEND WEATHER: Showers and storms continue to decrease in coverage for the weekend as rain chances will be closer to the 40-50% both days. Most of the activity will come during the afternoon and evening hours. We expect a partly sunny sky with highs in the upper 80s both Saturday and Sunday.

FOOTBALL WEATHER: Saturday, Jacksonville State will take on Stephen F. Austin at Cramton Bowl in Montgomery (2:30p CT kickoff on ESPN)… the sky will be partly to mostly sunny with only an outside risk of a shower or storm during the game. Kickoff temperature near 89°, falling back into the mid 80s by the final whistle.

IN THE TROPICS: A well-defined tropical wave is moving across the Windward Islands while producing disorganized shower and thunderstorm activity. This system is expected to move westward at about 15 mph during the next several days, and environmental conditions could become more conducive for slow development when it moves across the central and western Caribbean Sea early next week. Formation chance through 5 days…low…20 percent. 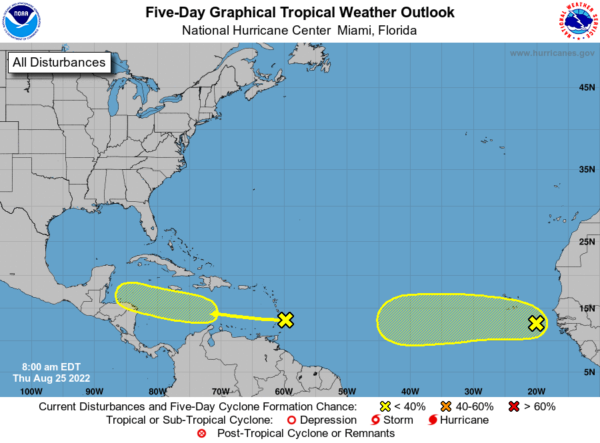 A tropical wave has moved off the west coast of Africa and is producing a large area of disorganized showers and thunderstorms. Environmental conditions could support some slow development of this system through early next week while it moves quickly westward across the eastern and central tropical Atlantic at 15 to 20 mph. Formation chance through 5 days…low…20 percent.

WORLD TEMPERATURE EXTREMES: Over the last 24 hours, the highest observation outside the U.S. was 117.3F at Ahwaz, Iran. The lowest observation was -103.0F at Concordia, Antarctica.