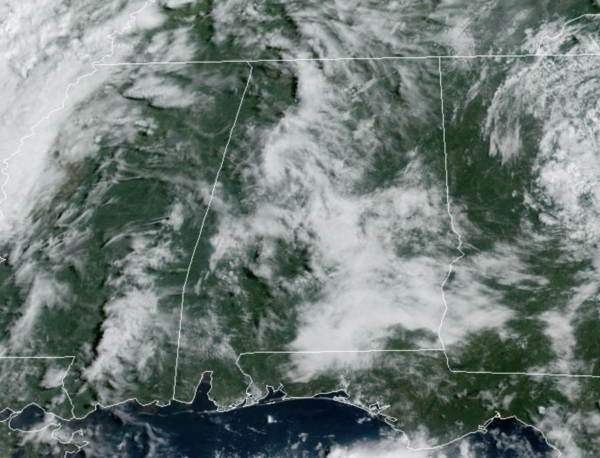 REST OF TODAY: Moisture levels are increasing and we are bringing back the chance of showers and storms during the afternoon and evening hours today with highs close to 90° with a partly sunny sky. Tonight, there could be a few lingering areas of rain at some high school stadiums, so you may need to take an umbrella. Lows tonight will be in the low 70s.

LABOR DAY WEEKEND: The forecast for the weekend, will feature partly sunny days, fair nights, with scattered to numerous showers and storms storms each day on occasion. No weekend washout, and no way of knowing in advance exactly when and where they form in advance, you just have to watch radar trends. Definitely have some indoor plans at times as you are likely to be dodging rain at some point. The chance of any one spot getting wet daily is 50-70%, and most of the showers and storms will come in the noon to midnight window. Afternoon highs Saturday through Monday will be in the upper 80s. Rain amounts of 1-2 inches are likely over the the holiday weekend for most places across Alabama.

FOOTBALL FORECAST: Auburn begins their season Saturday evening; they host Mercer at Jordan-Hare Stadium (6:00p CT kickoff). A shower or storm is very possible during the game; the sky will be mostly cloudy. About 81 at kickoff, upper 70s for most of the game.

Alabama also plays Saturday evening; they will host Utah State at Bryant Denny Stadium (6:30p CT kickoff). A passing shower or storm is a distinct possibility, otherwise it will be a warm, humid night with temperatures falling from the low 80s at kickoff into the 70s for most of the game.

NEXT WEEK: We will keep a persistence forecast going for the rest of the week with partly sunny days and scattered, mostly afternoon and evening showers and thunderstorms Tuesday through Friday. Highs will remain mostly in the mid to upper 80s.

DANIELLE: Became the first hurricane of the season this morning. At 300 PM GMT, the center of Hurricane Danielle was located near latitude 37.9 North, longitude 43.3 West. Danielle is moving toward the west near 1 mph. The hurricane is forecast to meander over the open Atlantic during the next couple of days, then slowly turn toward the northeast early next week. 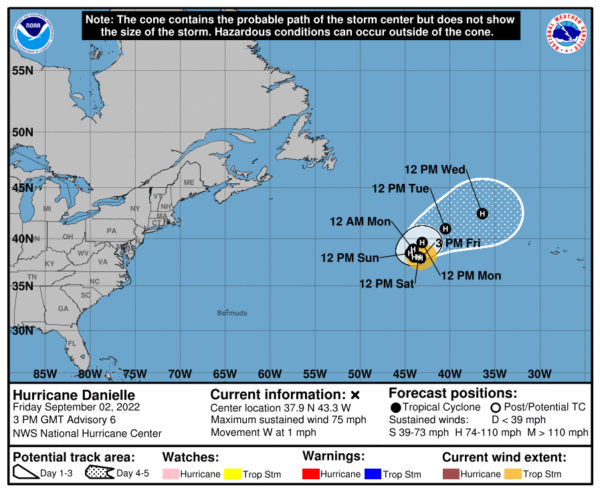 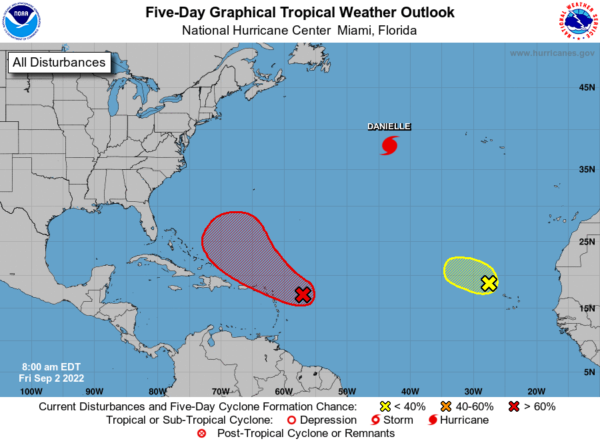 Elsewhere in the tropics, shower and thunderstorm activity has slightly increased since yesterday in association with an area of low pressure located several hundred miles east of the Leeward Islands. However, overnight satellite-derived wind data indicate the circulation remains broad. Although environmental conditions are only marginally conducive, any additional development of the system over the next few days would lead to the formation of a tropical depression. The disturbance is expected to move slowly west-northwestward, toward the adjacent waters of the northern Leeward Islands. Regardless of development, locally heavy rains may occur over portions of the Leeward Islands during the next couple of days, and interests in that area should monitor the progress of the system. An Air Force Reserve Hurricane Hunter aircraft is scheduled to investigate the system this afternoon, if necessary. Formation chance through 5 days…high…70 percent.

Also, shower activity associated with a broad area of low pressure located northwest of the Cabo Verde Islands has slightly increased since yesterday. However, this system is moving into an area of less favorable environmental conditions, and significant development is not expected. Formation chance through 5 days…low…10 percent.

WORLD TEMPERATURE EXTREMES: Over the last 24 hours, the highest observation outside the U.S. was 115.0F at Adrar, Algeria. The lowest observation was -106.8F at Concordia, Antarctica.