A weak front is moving southward through North/Central Alabama today and it could be the focal point for some showers and storms this afternoon and evening. Some stronger storms are possible and the SPC maintains much of Central Alabama in a “marginal risk” of severe storms as some storms could produce gusty winds. 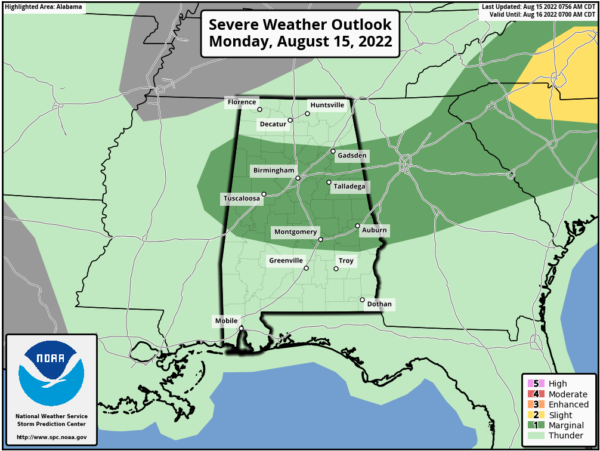 Many locations will remain dry today, and it is a hot day with highs in the low to mid 90s.

REST OF WEEK: Tomorrow will be a mainly dry day as the front sags south and we can expect a mostly sunny sky, with only a small chance of a few showers and storms during the afternoon and evening hours. Highs will remain in the low to mid 90s. With the boundary in place across the state, we are going to have northwest flow along it, that will push multiple impulses of energy producing rain and storms into Alabama Wednesday through Friday. These three days will features numerous showers and storms at times, and we note the SPC has issued a “marginal risk” for Wednesday as well for much of Central and South Alabama, and I would not be surprised to see more risk areas issued later this week. 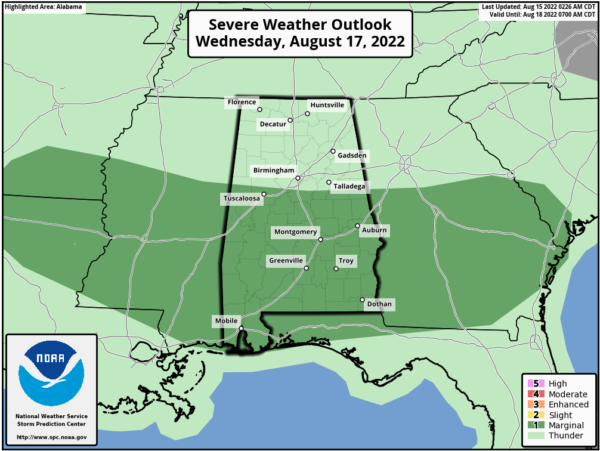 The main threats with the storms this week, will come from damaging wind gusts, but remember, storms will produce loads of lightning, and of course intense tropical downpours would could lead to areas of isolated flash flooding. With the clouds and rain, highs should hold in the mid 80s these days. Also, not everyone will see rain this week, and of course rainfall distribution will remain very uneven. This is one of those weeks where the day-to-day forecast can and will change a lot. Make sure you stay informed and weather aware!!

IN THE TROPICS: The basin is quiet again, as the NHC has given the lone tropical wave in the Central Atlantic at 0% of development. The rest of this week, development is not expected, but we will keep an eye on it all. 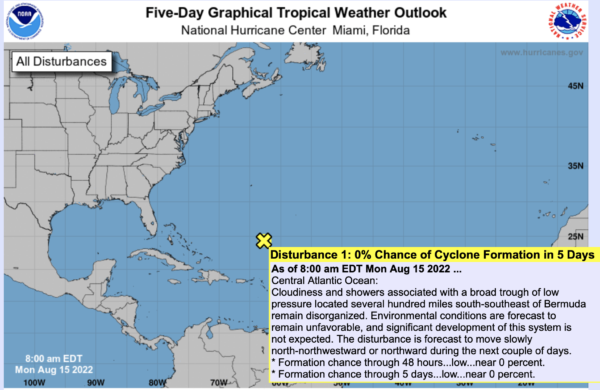 WEEKEND WEATHER: Rain chances remain high for Saturday, but the trough begins to lift out Sunday, meaning lower rain chances will return to the area. Saturdays highs should remain in the upper 80s, followed by lower 90s Sunday.

NEXT WEEK: Expect a mix of sun and clouds each day with “scattered, mostly afternoon and evening showers and thunderstorms” through the week. Highs will remain below 90 degrees on most days

WORLD TEMPERATURE EXTREMES: Over the last 24 hours, the highest observation outside the U.S. was 122.4F at Ahwaz, Iran. The lowest observation was -92.0F at Dome A, Antarctica.