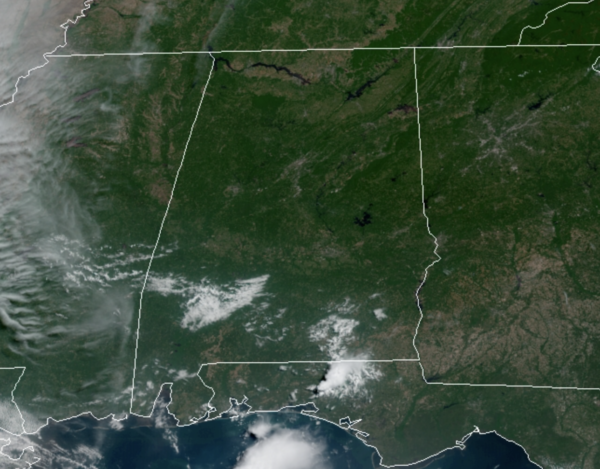 THE REST OF TODAY: Our Tuesday is sunny and not as humid as drier air continues to settle into the state. We are seeing temperatures this afternoon in the mid to upper 80s. Tonight, will be clear and comfortable with upper 50s and lower 60s.

ACROSS THE USA: The early-season heat across portions of the Southern U.S. will continue for much of this week with more potential record high temperatures. On Tuesday, expect 90s and triple digits from the southern Plains into parts of the Lower Mississippi Valley. Also on Tuesday, strong to severe thunderstorms and locally heavy rainfall will be possible from the central Plains into the Mid Mississippi Valley.

CRANKING UP THE HEAT: The upper-ridge strengthens over the Deep South the rest of this week, so expect a sunny sky each day and the hottest temperatures so far this year across Alabama. Tomorrow will feature highs in low 90s, followed by mid 90s Thursday and Friday. No rain in the forecast through Friday for North/Central Alabama.

WEEKEND WEATHER: The ridge breaks down this weekend and an approaching cold front will bring an increase in showers and storms across Alabama. The weekend won’t be a “washout”, but showers and storms are expected from time to time. The sky will be occasionally cloudy, and highs will drop back into the upper 70s to low 80s.

NEXT WEEK: For now the week looks fairly routine with warm, humid days and random, scattered showers and storms pretty much on a daily basis. Highs will be mostly in the mid to upper 80s.

WORLD TEMPERATURE EXTREMES: Over the last 24 hours, the highest observation outside the U.S. was 119.5F at Arafat, Saudi Arabia. The lowest observation was -88.2F at Dome A, Antarctica.