Drier air is flowing into the state this afternoon behind the departing cold front that brought the showers overnight and this morning. 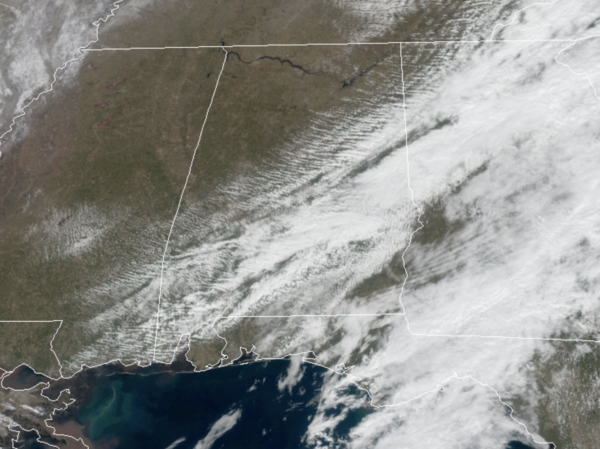 The sky is clearing, and temperatures this afternoon are mainly in the upper 50s and lower 60s. Tonight will be clear and cold with lows in the mid and upper 30s.

USA BRIEF: A fast moving frontal system will push through the eastern U.S. Monday spreading rain into the Southeast and areas of snow and ice from the central Appalachians and into the Northeast. Unsettled weather will persist in the Pacific Northwest Monday into Tuesday where heavy rainfall and high elevation snow is forecast.

TUESDAY/WEDNESDAY: These two days should be the best days of weather this week across Alabama. High pressure builds in and we are going to be staying dry with a good supply of sunshines both days. Highs tomorrow will climb into the mid 60s, while many of us flirt with the 70° mark Wednesday.

THURSDAY/FRIDAY: Most of Thursday looks to remain dry, but clouds will return to the state as moisture levels rise, and we can’t rule out a few isolated showers late in the day. It will be another very mild day with highs again around 70°. Rain becomes likely for the northern half of the state Friday as a weak surface front approaches, and due to the clouds and rain showers, highs should be a bit cooler, in the lower 60s.

WORLD TEMPERATURE EXTREMES: Over the last 24 hours, the highest observation outside the U.S. was 107.6F at Ballera Gas Field, Australia. The lowest observation was -73.7F at University Dome, Antarctica.

WEATHER ON THIS DATE IN 1990: Thunderstorms developing along and ahead of a cold front produced severe weather from southern Mississippi to North Carolina. One thunderstorm spawned a tornado just prior to dawn which touched down near Opp AL injuring ten persons and causing half a million dollars damage. Thunderstorm winds injured four persons south of Troy AL, and five people at Columbus GA. Thunderstorm winds gusted to 76 mph at Dothan AL.